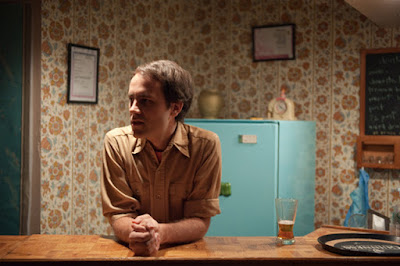 Do you have a spare 24-odd minutes to listen to a new song? No, I wasn't sure that I had either. Sandro Perri's latest album 'In Another Life' popped into my field of view just over a week ago (and was released last Friday). The name rang bells. Mrs S and I picked up a couple of his albums somewhere around 2007, one of which, 'Tiny Mirrors', became a particular favourite in the house for a while. As is the way of these things, Sandro took quite a while to follow up 'Tiny Mirrors' and he fell off my radar, so when I happened to read about the new album I was curious to find out what he's up to these days. It was with some surprise that I noted the extreme length of the title track and intended to check just a few minutes of it, before flicking on through the rest of the LP. 24 minutes later I was still there, absorbed.

Nothing dramatic happens in 'In Another Life'. Sandro delivers verse after verse over a gently noodling guitar and tinkling electronic backdrop and even as it finally crumbles and fades, I still feel good to go for another 20 minutes. One reviewer likened the song to '...a zen blues...' A good description.

These days I don't have 24 minutes to spare, Mr. S. (Remember the "olden" days when singles lasted 2:00-3:00 minutes? It was the only way they'd have a chance to be played on the AM radio stations.)

I hope you and Mrs. S. have had a great summer, despite the heat waves (or maybe because of them?) ;-)

"Do you have a spare 24-odd minutes to listen to a new song?"
The Swede, I've got all day! Playing it now.