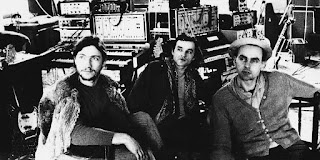 Harmonia - Sehr Kosmisch
Posted by The Swede at 07:00

I have a 2 track remix ep of Harmonia & Eno which came out in 2009. Sometimes In Autumn remix by Shackleton and By The Riverside by Applebim and Komonazmuk. I intend to post the Shackleton remix in the Monday slot at some point.

This is really good

These Monday slots are getting very hypnotic.

Great song by an forgotten album. Thanks for bringing this one back to my attention Swede.