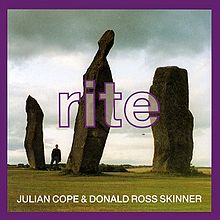 Julian Cope & Donald Ross Skinner - The Indians Worship Him, But He Hurries On
Posted by The Swede at 07:00

Cope on a Monday- brilliant.

I have spent the last couple of years catching up with Cope’s work, but I have never even heard of this this album before. A noodling Cope is always an interesting listen. Like this a lot. Weird and wonderful.

This is great. Have you heard the Dope feat Julian Cope? Two long meandering tracks which are well worth checking out

Brian. There are now several volumes of 'Rite', I've lost touch with how many, but, if you're ok with Cope's looser stuff, they're all good.

Drew. Don't think I've had the pleasure, but it sounds up my street.