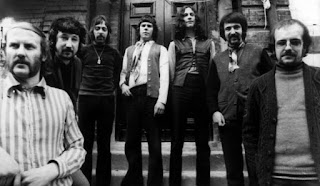 Here's a slice of golden age prog from If's second LP, released in December 1970, just three months after their debut. The band featured the saxophonist Dick Morrissey, who would not only go on find success in the 1980s as half of Morrissey-Mullen, but also as a session player on a multitude of famous recordings by other artists - there's a fighting chance that you have something by him in your collection. That's him on 'The Love Theme From Bladerunner' and on Style Council's 'Confessions of a Pop Group and on 'Press to Play' by Paul McCartney and on Orange Juice's 'Rip it Up' and on Peter Gabriel's third self-titled LP.

Love Morrissey! Met him at the Brecon Jazz Festvcal in 1990.

Not connected to this but... I listen to R6 while I work and I wondered... might it have been you who got a little mention this afternoon?! I hope it was :-)

John. I saw Morrissey-Mullen in Southend in the early 1980s, but to be honest If is more my cuppa tea.
C. You might well think that - I couldn't possibly comment ;-)

Uh, there is something quite intriguing going on in this comment string that I'm missing. More info, please.

PS Swede you might want to pm me for the Miles... Couldn't find your email addy anywhere.

Interestingly, The Swede, Dick was married to a swede and lived in sweden for a while