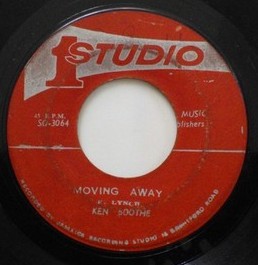 Still working at the age of 71, Ken Boothe is probably best known to the world at large for his cover of Bread's 'Everything I Own', which reached the UK Number 1 spot for three weeks in October 1974. To quote Joe Strummer in '(White Man) In Hammersmith Palais', '...Ken Boothe for UK pop reggae...'. Boothe's career, however, stretches back to the late 1950s, with his first recordings appearing as part of a duo with Stranger Cole in 1963. His solo career began in earnest in 1966 with a series of ska and rocksteady tunes for legendary producers such as Leslie Kong, Sonia Pottinger and Phil Pratt. Boothe also recorded for Coxone Dodd's Studio One label and here he is on that very imprint in 1968, with his superb rocksteady reworking of a song written and recorded the previous year by another Ken, UK entertainer Kenny Lynch.

That Dire Wolves track is excellent. That's me off to Bandcamp to listen to more.