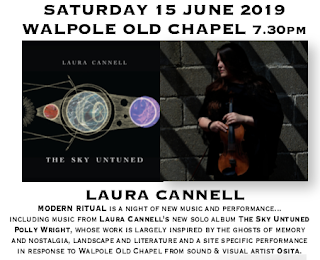 A couple of months ago I drove 15 miles into the heart of the Suffolk countryside for an unforgettable evening of music in the atmospheric 16th century chapel at Walpole. Laura Cannell’s ongoing Modern Ritual series is '..ancient, modern, experimental, real, fictional, personal & folkloric and has become a unique platform for premiering works from outside of the contemporary mainstream.' The Walpole concert was the 12th in the series, featuring performances from Osita, Polly Wright and Laura herself. The marriage of venue and music could not have been more perfect. Laura Cannell is about as local an artist to me as it's possible to be. She's released two quite differing albums this year, both recorded in a 13th century church less than 3 miles from this house. The first of them, 'The Sky Untuned', was released in April and sits among my favourites of 2019 so far.

Laura Cannell - Flaming Torches
Posted by The Swede at 07:00

It is not easy to listen during the day Swede. But listening to this beauty voice when you have the time and if it possible you can hear a sound you never heard before. I think this could be the sound of the sirenes. Wonderful and thank you.