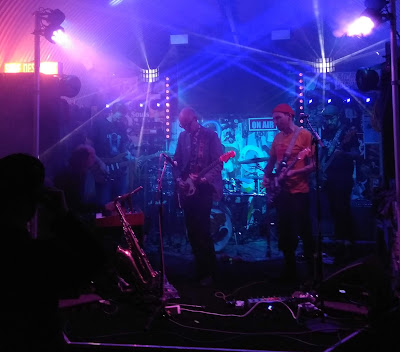 After several years of banging on about them to anyone who would listen (including many times on these pages), I caught a show on  Kungens Män's first ever UK tour last week and they were quite simply transcendent. The Swedish six-piece played five extended tunes, each one blooming slowly from subtle beginnings into gloriously intricate cosmic walls of sound - high on improvisation, but perfectly paced and judged. Honestly, I could've stood there all night and still have asked for more. My gig of the year, without a doubt.

After the show I chatted with members of the band, who were genuinely touched by the reception they'd received from the UK audiences. I marvelled at their prodigious output over the past twelve months; two Kungens Män albums, not to mention several other releases by various side projects that have helped ensure that my bank balance has struggled to stay in the black throughout 2019. It was then that they let slip that not only do they all have day jobs, but some of them have families too. Such is their work rate, I'd never even considered the possibility that the individual band members would be able to find time for a life outside of music.

Kungens Män are intent on returning to these shores in 2020. If they come to your town, I strongly advise that you cancel all plans and get to the gig. You can thank me later.

Kungens Män - Diskbänksockultism
Posted by The Swede at 07:00

Good news that they plan to return as I couldn't make the Glasgow gig last Sunday night due to early rise on the Monday morning to go to Newcastle. Glad they were better than expected and that both you and SA were able to see them.

My expectations were high Drew, yet still wildly exceeded. I had a 5 hour round trip drive to the gig and eventually got to bed at 2pm - my alarm for an early shift went off three hours later. The following day was challenging to say the least. Brilliant to hear that SA caught the tour too.

I loved them, a shorter trip for me though. Reading your review it sounds like we had a very similar experience.