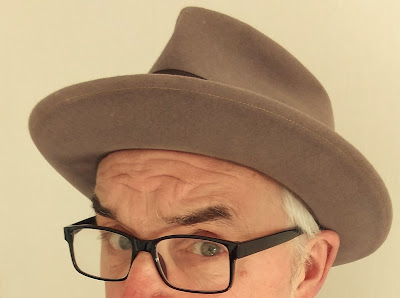 C's brilliant bippity boppity hat musings of a few days ago (here) brought to mind my own long term struggles with.....well, head-wear of any kind really. In the same way that I don't have the correct shaped face to successfully support any kind of facial hair, I also possess a bonce that for some reason just can't carry off a hat, much to my eternal frustration.

Around 15 years ago I bought an old fedora from a vintage store in Brooklyn. It was love at first sight. I wore it constantly all around New York for the rest of that trip, convinced that I looked the bee's knees, regardless of what my reflection in store windows told me to the contrary. 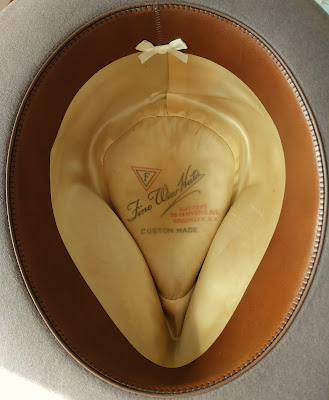 The fedora was made by Fine Wear Hats of 58-14 Myrtle Avenue in Brooklyn, which is approximately three miles from the location of the vintage store where I eventually found it all those years later. I wish the hat could talk. I'd love to know about its original owner. Did it ever leave the city, the borough, or even the neighbourhood?

Back in the UK, in the 15 years I've owned this fine titfer, I've probably worn it outside the house maybe twice, tops. I'm now fully conscious of the fact that it looks ridiculous perched on my head, however much I try to convince myself otherwise. Inside the house though, I wear it constantly - it's both extremely comfortable and strangely comforting. Come to think of it though, with no prospect of having a professional haircut in the foreseeable future and the old barnet becoming increasingly unkempt, perhaps the hat might yet serve an outdoor function as the lesser of two evils.

You look very dapper in the pic! What a lovely hat. Like books, yes, wouldn't it be great if such interesting vintage items could tell their story? Then again, you can leave it to your imagination and still go to distant places where the hat may never have been in reality.
I love the idea of a 'comfort hat', reckon we could all do with one now. Let's bring back bippity boppity hats and vintage fedoras!
Many thanks for the reference too.

I sympathise with your hat-unsuitable head shape, Swede.

If you want to get ahead, get a hat! (Ah the old ones are the best)

I have to concur with Rol and CC, Mr. S. I've never been able to find a hat that makes me look anything but ridiculous. (Canadian winters present a huge morale problem for me!)

However, I must agree with C - you look rather dapper!

P.S. I changed the feed settings and the link should work now. Sorry for the difficulties.

Hats look daft on me too, always have done. My youngest, however, is the exact opposite. If we're ever out shopping together and visit a store that sells hats, I get her to try on a selection, just hoping that there will be one that makes her look even just a trifle silly. To no avail, she just has one of those heads that suits headwear, even men's.

Looks great TS - Bit of an rock 'n' roll look to you there. Yes, the lack of hairdressing at the moment is going to make many of us reach for our headwear but coming up to summer the wooly hats are out and I can never get anything else to stay on my head.

Wouldn't it be great to know the hat's story though, especially one bought in New York.

Having a big head (7 7/8), just finding a lid is a job in itself. I concur with your readership - a hat suits you. It'll go down well in Edinburgh, trust me.