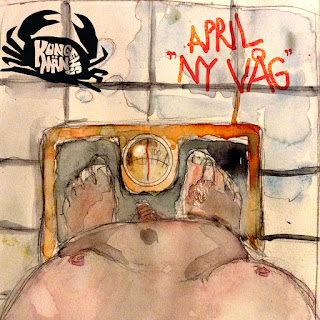 Back in 2013 the mighty Kungens Män (then only a year old) embarked on a project to release an album of downloadable music per month for a whole year, though for reasons best known to themselves, they actually kicked off the series in October, concluding it in September 2014. Therefore April's entry, 'Ny våg', is technically the 7th volume, but, call me old fashioned, I started this series in the logical place, at the beginning of the year! (For all kinds of reasons, I didn't get around to posting anything from the March release, but I plan to double back and feature it at a later date.)

The title of April's album translates as 'New Wave' and it's crammed with the usual top notch noodly improvised psych that we've come to know and love from the band. Kungens Män released a superb brand new double LP, 'Trappmusik' earlier this year and offshoot projects Automatism and Fanatism were also beavering away in the studio before the current situation put proceedings on hold, so hopefully there's plenty more of the good stuff to come in due course.

All 46 minutes of 'Ny våg' are available here for a 'name your own price' contribution. Today's selection from it translates as 'Fuss Comforter'.

Kungens Män - Tjafsaren
Posted by The Swede at 07:00

Another top quality song from KM, a band I cannot keep up with. Both prolific and top quality.

Bugger, missed out on Trappmusik! These guys are so prolific and so so good!