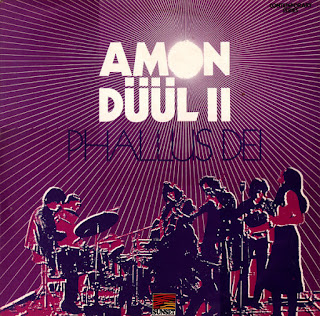 Back in the days when pocket money dictated the length and breadth of my expanding musical horizons (and record collection), the humble budget LP played a key role. 'The Faust Tapes' and Gong's 'Camembert Electrique' were welcome additions to the household in 1973, the two of them combined coming in at just over a quid. Amon Düül II's 1969 debut album 'Phallus Dei' was also repackaged and reissued at around the same time, on the otherwise largely middle of the road Sunset label, at around 69p. My pals and I swooped on it it, how could we resist that far out sleeve? We each took our copies home, later re-grouping to share our thoughts. At the tender age of 13 or thereabouts, we of course had no immediate frame of reference for the proto-Krautrock racket coming out of the tiny mono record players in our respective bedrooms, though when we listened to the LP together, I vividly recall that we particularly enjoyed singing along to the '...give me a lamp...it's going to be weird...' line at just shy of the 4½ minute mark on 'Luzifers Ghilom'.

Amon Düül II - Luzifers Ghilom
Posted by The Swede at 07:00

69p for an album in 1973 seems like a good deal, considering I paid 45p for my first single that year.

Fantastic post Swede. And 69p is nothing for this great record. Don't know how much I payed for it but surely more than decouple.

If only records were vaguely as reasonably priced these days

It’s unanimous. Vinyl prices are completely out of hand. I have bought more CDs than vinyl so far this year for the first time in ages. Not proud of that but feel backed in a corner. Ten bucks is much more palpable than $22-$25 for most titles these days.