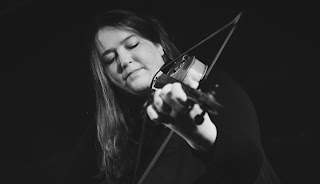 One of several already booked 2020 concerts I lost as a result of the pandemic was Laura Cannell's Modern Ritual XIII, which was scheduled to take place last July, just round the corner from King's Cross station in London. I've been lucky enough to see Laura play several times over the years, most recently in 2019, at the 12th of her Modern Ritual series, in a small 16th century chapel, hidden deep in the Suffolk countryside.
Laura kept herself busy last year, releasing the haunting 'The Earth With Her Crowns' in the summer and 'These Feral Lands Volume 1' in November. The latter features guest performances by cellist Kate Ellis, broadcaster Jennifer Lucy Allan and the terrific local writer/performer Polly Wright. Another name heavily involved on the album is the comedian Stewart Lee, who was also slated to appear at that cancelled Modern Ritual gig in London. Lee's contributions to 'These Feral Lands' are a revelation and even if  this style of music isn't generally your thing, you should make it your business to at least check out 'Black Shuck', where he summons his inner Mark E Smith and Captain Beefheart to startling effect.
Here though is another tune from 'These Feral Lands', featuring Stewart Lee, Laura Cannell and Kate Ellis. 'Wrekin' delves deep into ancient Shropshire folklore, albeit with unexpected appearances by Kendo Nagasaki and Tony McPhee.
Laura Cannell, Stewart Lee & Kate Ellis - Wrekin
Posted by The Swede at 07:00

I first read that as Laura Cantrell and thought it was an interesting change of direction!

Funnily enough, whenever I see Laura Cantrell's music popping up on the blogs, I'm similarly confused in the opposite way!

Interesting piece of storytelling there. I might need to hold the hand of my Mrs. if I was in a small 16th century chapel hidden deep in the Suffolk countryside while this piece is being performed. This not going to see bands live thing is really getting me down.