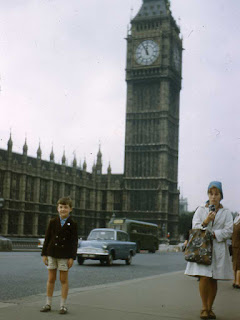 Digging through some old photos recently, I came across this one, taken by Dad on one of our many Sunday outings around London in the mid-1960s. We hit a lot of well known spots on that particular day, several of which he documented with his trusty camera. Dad worked in busy hi-fi shops on both High Holborn and Oxford Street during this period, but enjoyed wandering the relatively quiet streets of the city on Sundays, when practically everything was closed. I vividly remember that, in spite of it being 20 years on from the end of World War II, a number of bomb sites still remained, scarring the landscape, apparently untouched and open to the inquisitive eyes of a little boy and his Dad. Many central areas were truly deserted, our footsteps and chatter echoing around the empty streets and pavements. Later we'd amble East to the heaving Petticoat Lane Market, where it felt by comparison that every family in London had gathered to barter, haggle and trade.

So there I am in front of a filthy looking Big Ben (it practically glistens these days), wearing what is by far the coolest jacket I've ever owned in my life. An old Green Line coach heads out of shot - possibly a 705 on the way to Victoria. A Ford Anglia passes on my side of Westminster Bridge - a car I knew well as an Uncle drove one throughout the 1960s. An unknown lady walks into shot. When I initially rediscovered the photo, my 21st century instinct told me that she was looking at her phone, but of course on closer inspection she's holding her own camera. Perhaps, buried deep in an old shoebox somewhere in this world, there's a fading image of Big Ben being photobombed by an anonymous young lad in a rather fetching brown jacket.

The snap gives me a perfect excuse to dig out Lee 'Scratch' Perry's fantastic 'Big Ben Rock', a 7" single released for Record Store Day 2019 and featuring Boz Boorer on guitar.

It's not just the photo that's special here, it's your vivid descriptions of the scene and the memories it evokes. A wonderful read.

This is terrific. The best kind of nostalgia.

I really enjoyed reading this post and sharing your memories from a long time gone by. Great job and a great choice of song as well.

As they all said. Brilliant photo and musings.

Brilliant in every way. It's another world. Love the Ford Anglia in the shot!