His Name Was Always Buddy 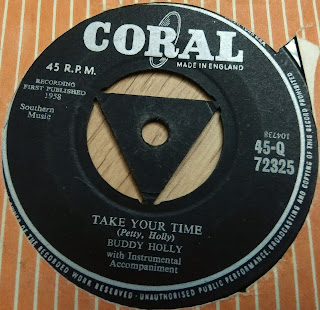 I've probably mentioned this before, but scattered around the various hard-drives in this flat lurk several partially completed ICA's, destined, one day, for JC's consideration to be included in his legendary ongoing series over at The (New) Vinyl Villain. A couple of weeks ago, The Blogfather himself shared a Buddy Holly ICA, one of the very artists that I had on my 'to be finished' list. When it comes to Buddy's music, it'd be hard to put a foot wrong in terms of pulling together a worthy compilation and indeed JC's ICA is pretty much faultless.

Buddy Holly had been dead for 14 months when I appeared on the scene, but his music was in the house from day one. Dad was a fan and I still carry his handful of original singles with me to this day (that's one of them at the top of this post). I played those singles endlessly on the trusty family radiogram from a very young age and know every note, every crack and pop on each one of them, intimately. Buddy's music had such a profound effect on me that years later I later picked up one of the very earliest career spanning box sets ever released by any artist, 1979's 'The Complete Buddy Holly'.

Here's a song that would've made my version of a Buddy Holly ICA. 'Take Your Time' appeared on the b-side of 'Rave On' in 1958 and is a sparse, organ led gem. It's lyrically interesting too - consider such lines as '...heartstrings will sing like a string of twine...' or '...go with me through, times 'til all times end...' Somewhere, a young Bob Dylan was paying attention. At the time of his death on February 3rd 1959, Buddy was just 22 and had been recording professionally for barely 2½ years.

Not had that before, very nice.

I wish my father had played Buddy Holly records.