This Life is Mine 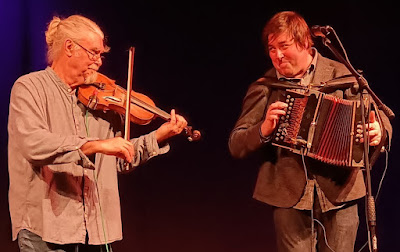 Overall, 2022 has been a pretty quiet year for me on the live music front, though it's finishing with a flurry of folk gigs, the penultimate of which was last weekend when folk royalty visited the area in the shape of Peter Knight and John Spiers.

At 47, John Spiers is generally acknowledged to be the foremost melodeon player of his generation, performing over the years with Bellowhead, Gigspanner, Eliza Carthy and Jackie Oates. On Saturday evening he bought five different melodeons and a concertina to the stage - not for nothing is he known affectionately as Squeezy. Outside of music he's a fervent allotmanteer, with much of his social media presence being given over to plants, crops and recipes.

Peter Knight is a classically trained violinist who was an integral member of Steeleye Span for the best part of 40 years. These days, in addition to the duo work, he leads the various iterations of Gigspanner. The dexterity and creativity in his playing belie his 75 years and it was a mesmerising privilege to witness this music at such close quarters.

Knight and Spiers have been playing as a duo since 2016 and in performance communicate on an almost telepathic level, via a series of barely perceptible raised eyebrows, nods and smiles. It really is a joyous traditional music masterclass. As always, bottom lips wobbled and eyes moistened when Peter stepped forward to sing his wonderful 2014 composition 'From a Lullaby Kiss'.

Peter Knight - From a Lullaby Kiss

John Spiers looks like Stephen Fry in that picture!

How lovely that you've been able to see this pair perform. The song you included sounded so perfect. Melodeon - what a great sounding word for an instrument with a great sound.

I overused the word 'sound' in my comment - apologies!

I've seen them perform several times, in various incarnations, at Folk East over the years, but this was the first time indoors and up close!