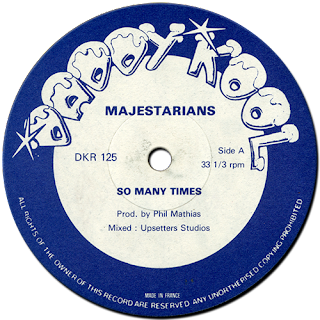 Fronted by Everton Dacres, cousin of Barrington Levy, The Majesterians released a clutch of singles between the late 1970s and mid-1980s, before disappearing from view. 'So Many Times' was recorded in 1979 at The Black Ark, though with band member Phil Mathias at the controls rather than Lee Perry. Bud Beadle, who played sessions for everyone from T.Rex to Otis Spann and Suzi Quatro to Alexander O'Neal, in addition to being a fully paid up member of Ginger Baker's Airforce, contributes flute to the tune.

The Majestarians - So Many Times