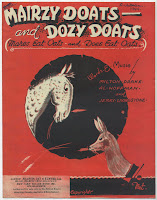 What lovely memories, beautifully told - and I bet your well-stirred porridge is delicious!

Great sheet music too. I know the song but I don't know where I first heard it as I wasn't a frequent listener of Junior Choice. I'm wondering if my mum used to sing it, perhaps that's it.

Thanks for the kind words folks. My porridge is ok, but what I wouldn't give for another slice of Dad's bread.

C. Perhaps you're thinking of the version by Leland Palmer in Twin Peaks?

It probably won't taste as good as The Swede Senior's bread, but if you email me your address I'll gladly post you (gratis, of course) a loaf of Medd's Bread.

You Dad sounds a good guy...it is strange how some things do not taste quite the same even that you use the same ingredients and as near as possible the same way of cooking.
Everybodies Mince tasts different as is their Spagbol. One of lifes mysteries.