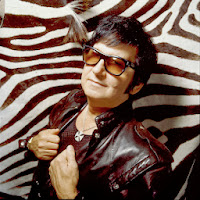 Regrets, I've had a few...and many of them concern artists I never got to see in concert. Roy Orbison is a prime example. Thanks to Dad's record collection, I'd been listening to Roy Orbison since before I could walk - to this day 'Running Scared' can reduce me to tears. By June 1985, however, neither Dad or I gave serious consideration to travelling the barely one mile from home to see him onstage at the Ipswich Gaumont. Dad's tastes had moved away from 'pop' towards the classics and I was concerned that, by now, Orbison's performance would be a pale, embarrassing, showbizzy, shadow of its former glory, replete with lazy vocals and greatest hit medleys.

A week later, I ran into a friend who'd attended the concert. My heart sank as he raved about the show, confirming what is now commonly known to be the case, that Roy Orbison never 'phoned in' a performance in his life, not even in the lean years. His voice, a magnificent mystery, hit every glorious note and continued to do so, right up to his untimely death in 1988, 25 years ago today.

As a child of the sixties the Big O is a big part of my soundtrack, I just loved his stuff, but I tend to love too much. I have a post on hold at the moment about him (I better wait now)But that voice, it gets me every time. Every time. I loved the Bruce tribute on Human Touch and as for the The Travelling Wilbury...well it shows the affection of his fellow artist.

I know it's a cliche, but he really could've sung the phone book and made it captivating couldn't he? I look forward to reading your post.

I can well understand your regret. Always been a fan. He was always great even when no one was listening.