Nic and Joe Jones - In Concert 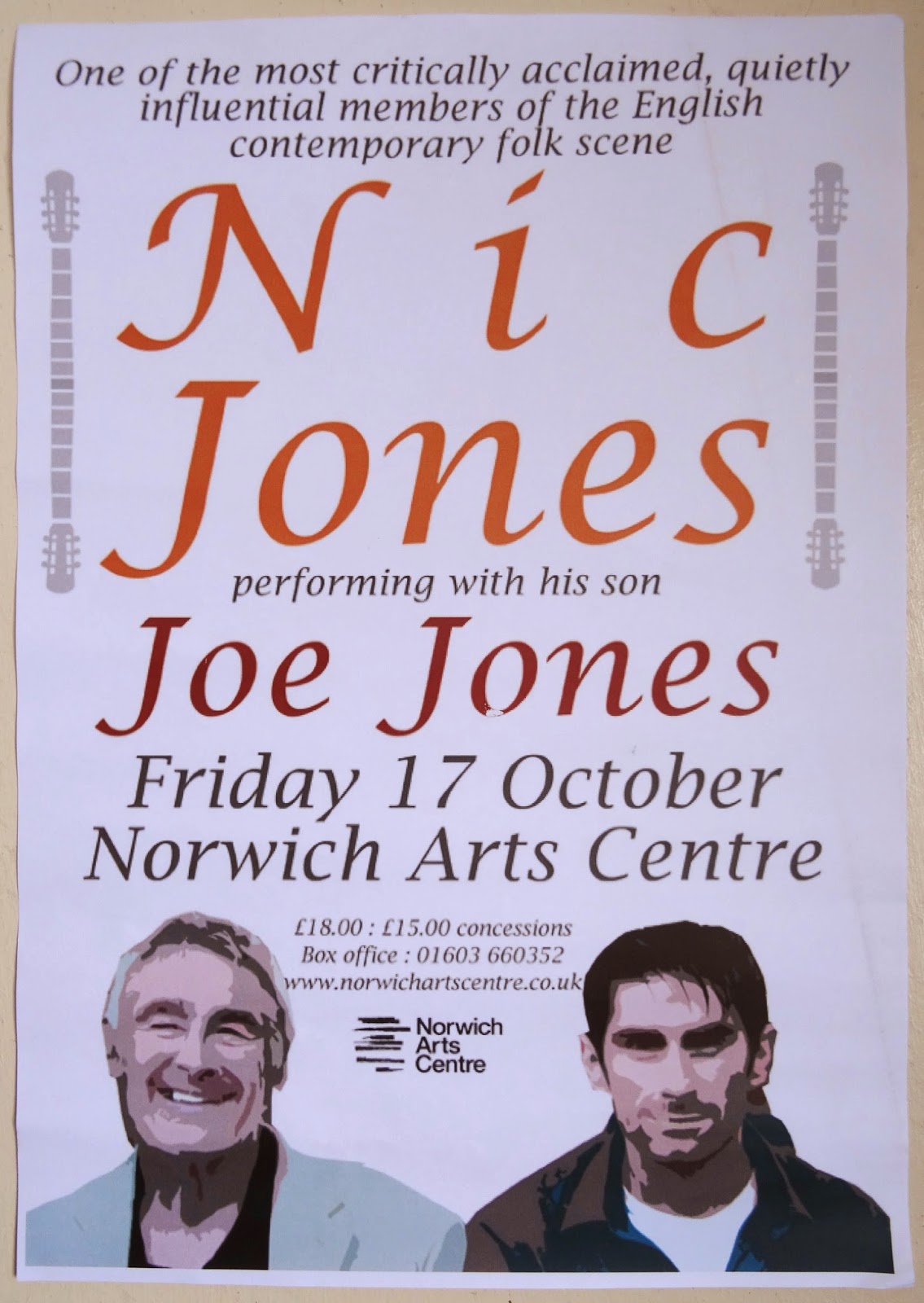 As the house lights dim, Nic Jones appears from the side curtain, puts down his walking stick and makes his way unsteadily across the stage, pausing to wave and bow to the cheering and already emotional audience. Behind him, Joe, rake thin, jet black hair, steps to the microphone to affectionately address his Dad. 'What are you bowing for? You haven't done anything yet!' Later, Nic introduces Bill Worsfold's, 'I Only Spoke Portuguese', by explaining that it's the true story of a couple, neither of whom spoke the other's language, who were therefore unable to speak directly to each other throughout their long marriage. Joe, busy re-tuning his guitar, looks up for long enough to mutter, 'Yes, I expect Mum would've quite liked that...' Badum tish!

The set, beautifully paced, is weighted towards the classic 'Penguin Eggs' LP and for the latter part of the concert Nic and Joe are joined on stage by the original melodeon player on that record, East Anglian native, Tony Hall. The significance of this reunion isn't lost on Joe who stands strumming gently, grinning from ear to ear, between the two men, as they delicately rekindle their musical relationship. Not for the first time this evening, high emotion threatens to overshadow the moment and it's skillfully diffused by Tony Hall's quip after Joe introduces 'The Little Pot Stove'. 'What are we playing now?' he asks, pretending not to have caught Joe's announcement, 'The Little Pot Noodle?'

Joe, an astounding player, prompts approving smiles and warm paternal applause several times during the concert, Father and Son lightheartedly disagreeing about just how much guitar know-how Nic has passed on to Joe. 'Three chords' says Joe, 'No - I just told you how to hit the thing!' counters Nic. Though he's understandably frail, Nic's voice is strong, his phrasing undiminished. A towering presence, thought lost to us forever, but, against all odds, here he is, performing again. Long may he continue. An unforgettable evening.

I'm truly chuffed for you - this must have been amazing. Very special indeed.

I read about him because of your posts...28 years out of circulation. He must have really been wrecked.

My only regret is that Nic and Joe came out to meet and greet after the gig, but I was feeling so shockingly bogged down with the lurgy I didn't feel up to hanging around. I'd been stifling coughs and sneezes all night as it was. Apologies to anyone standing near me who might now be feeling under the weather, but it would've taken more than a brush with the flu to keep me away from this one.