The Mysterious Case of the 24 Beat Instrumentals

Did I ever tell you the one about what was, until recently (see here), my second best ever car-boot sale find?* It was ridiculously early one Sunday morning in 1991, in a shady corner of a car park, adjacent to Ipswich Town football ground and as I ambled along a row of tightly packed wallpapering tables, bowing under the weight of a thousand unloved nick-nacks, I spied a cardboard box on the ground, pushed back beneath a table and almost out of sight. I pulled the heavy box forwards and lifted the flaps to discover a pile of magazines, topped by a vintage copy of the Radio Times. Nothing too exciting here, I thought. Delving a little deeper, though, beneath several more old TV listing guides, lay 24 random issues of Beat Instrumental Magazine from the late 1960s and very early 1970s. I got the whole box for a quid.

During that period, Beat Instrumental was a publication where Clodagh Rodgers rubbed shoulders with King Crimson and an interview with Glen Campbell jostled for position with Viv Stanshall's latest column. I had hours of fun ploughing through the magazines, reading about 'underground' band Tyrannosaurus Rex shortening their name to T.Rex, Jimmy Page unveiling the line-up of The 'New' Yardbirds and The Trogg's adventures on a package tour with a new young band called The Jimi Hendrix Experience. Towards the end of the 1990s, with finances a little tight, I sold all 24 of the magazines for an amount that, at the time, it would've been silly to turn down. 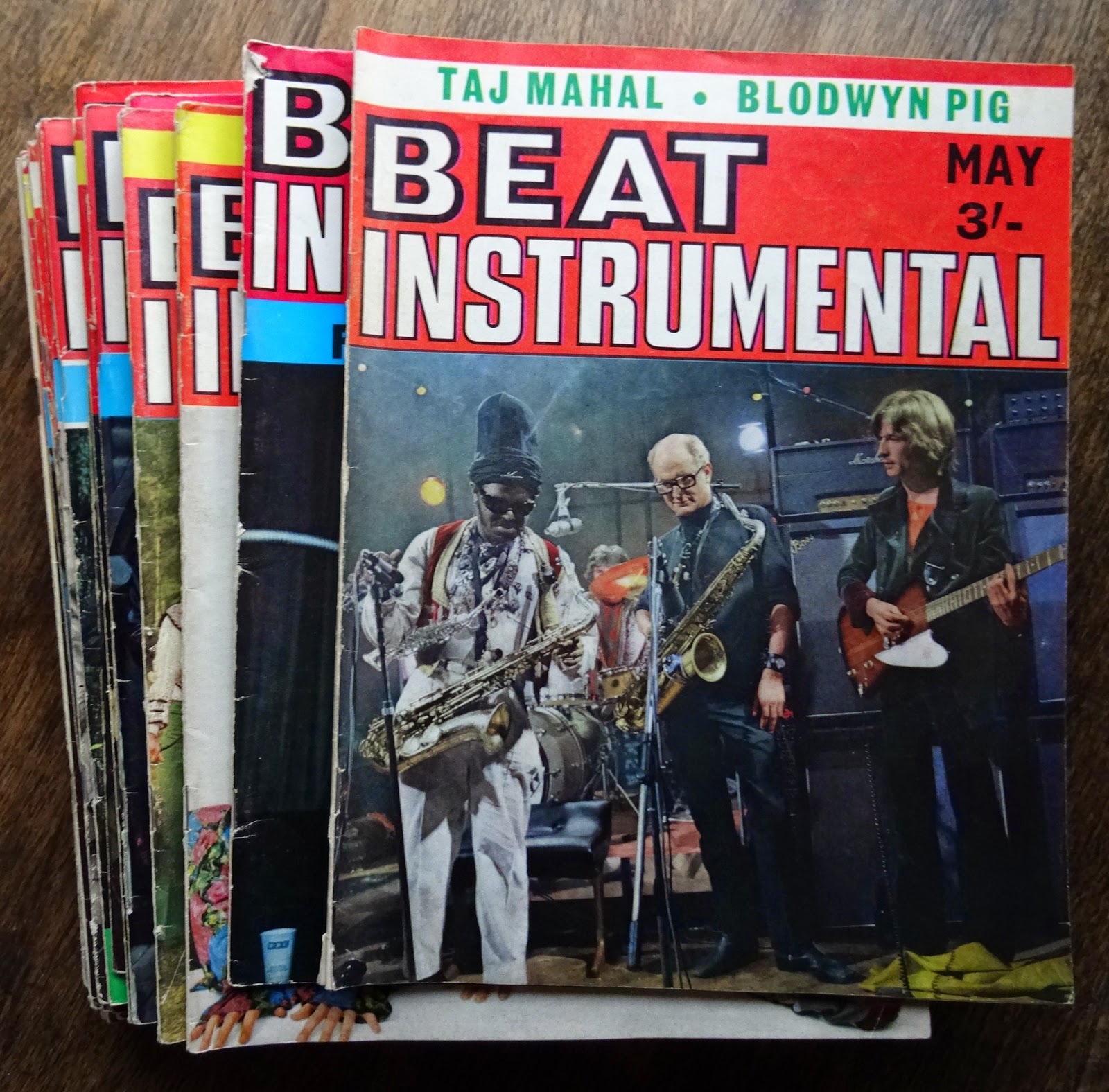 The only reason I mention this fairly uninteresting little tale, is that at the weekend I stumbled, in not totally dissimilar circumstances, upon another batch of Beat Instrumentals. The weird thing is that, once again, there were 24 of them in the box. Not consecutive issues, but 24 random ones. I picked them up 50 miles from the location of that initial haul 23 years ago and 120 miles from where I later sold them, so I doubt they're the same magazines, returning like a group of long lost homing pigeons (though I've yet to totally rule this out), but why 24 again? Why not 5 or 10 or 50? Perhaps people only dispose of them in lots of 24 - I did. Perhaps 24 is my lucky number. Maybe it's time I did the lottery. Either way, my spare time reading material for the immediate future just took a turn for the better.

Here's Coxsone Dodd's house band, The Sound Dimension, with a killer Studio One instrumental entitled 'Heavy Beat'. You see what I did there? Instrumental.....Beat..... Oh, please yourself!

(*My number one best ever car-boot sale find? I really must share that, one of these days.)
Posted by The Swede at 09:05

Yes you must.
We've moved three times in the last few years (never again) and every time I've found a box full of music magazines, fanzines, news letters, Matador used to put out a very funny newsletter...stuff from the early 90s and even some of my mommas music magazines from the 60s.
It really is fun to read that stuff now.

What a wonderful haul! I'm envious of the quality of the boot sales you frequent. Can't wait for the tale of the best ever find.

Erik. Mags, fanzines, general ephemera - I'm a sucker for it. Your boxes sound like my kind of treasure trove.
As for moving house, I'm with you 100% - never again!

SB. What you don't hear about are all the Sunday mornings that I drag myself out of a comfy bed at 5am, do a 40 mile round trip to the car-boots and arrive home with zip!

What a great find.

I just misread your reply to SB above and wondered why you would actually buy a zip at a bootsale...

I have been buying musical papers since the early sixties...remeber cutting pics of Bob and puting them up in my room....I have read them all but never keep them. They just take up too muchy room....I subscribe to Q and Uncut and get then as download....to CDs/LPs/ Mag lying around anymore....hard drive living....thats me...but great find and after reading great clutter.