Dad took me to a speedway match for the first time in the Summer of 1967. I was seven years old and instantly hooked. For the next nine years we traveled all over London and South East England attending three or four speedway fixtures a week. Now I look back on it, we must have gone to around 500 matches in all that time, just me and Dad - originally on his Honda 90 motorcycle and later in his trusty Hillman Imp.


Memories of those many happy hours spent enveloped in diesel fumes, diligently filling in programmes, collecting autographs and cheering on my favourite riders, came back to me recently when I unearthed a couple of pages torn out of two very old speedway magazines, which I found buried at the bottom of a box. The pages feature crowd photos from speedway matches, with a lucky supporter circled on each - a weekly competition in this particular publication. The first one I looked at featured a crowd scene from Romford, taken one Thursday evening in the summer of 1969. And there we are. Dad with cigarette in mouth and programme in hand, and me leaning on the barrier. We're deep in conversation and oblivious to the photographer, unlike the lucky winner! 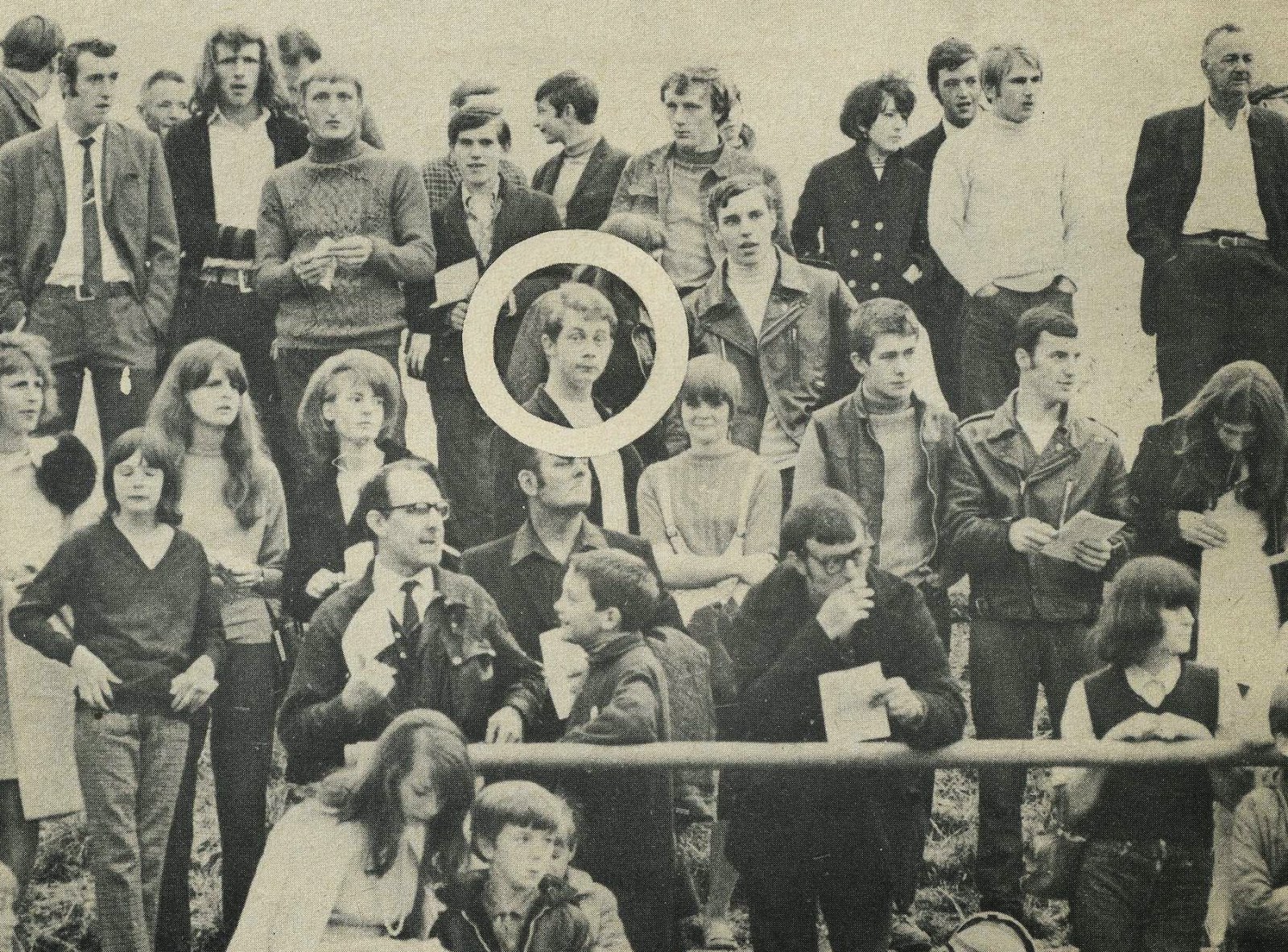 The other page is from April of 1968 and features a similar photo, this one taken at Hackney, home of my favourite team, 'The Hawks'. Every Friday evening, Dad and I would grab our preferred vantage point high on the 4th bend, by the pits, which happened to be the very section of the stadium that the photographer chose to take his snap. This time I obviously spotted him, as I've worked my way down towards the front and, bobble hat on head, am looking straight at the camera. Still not a winner though! 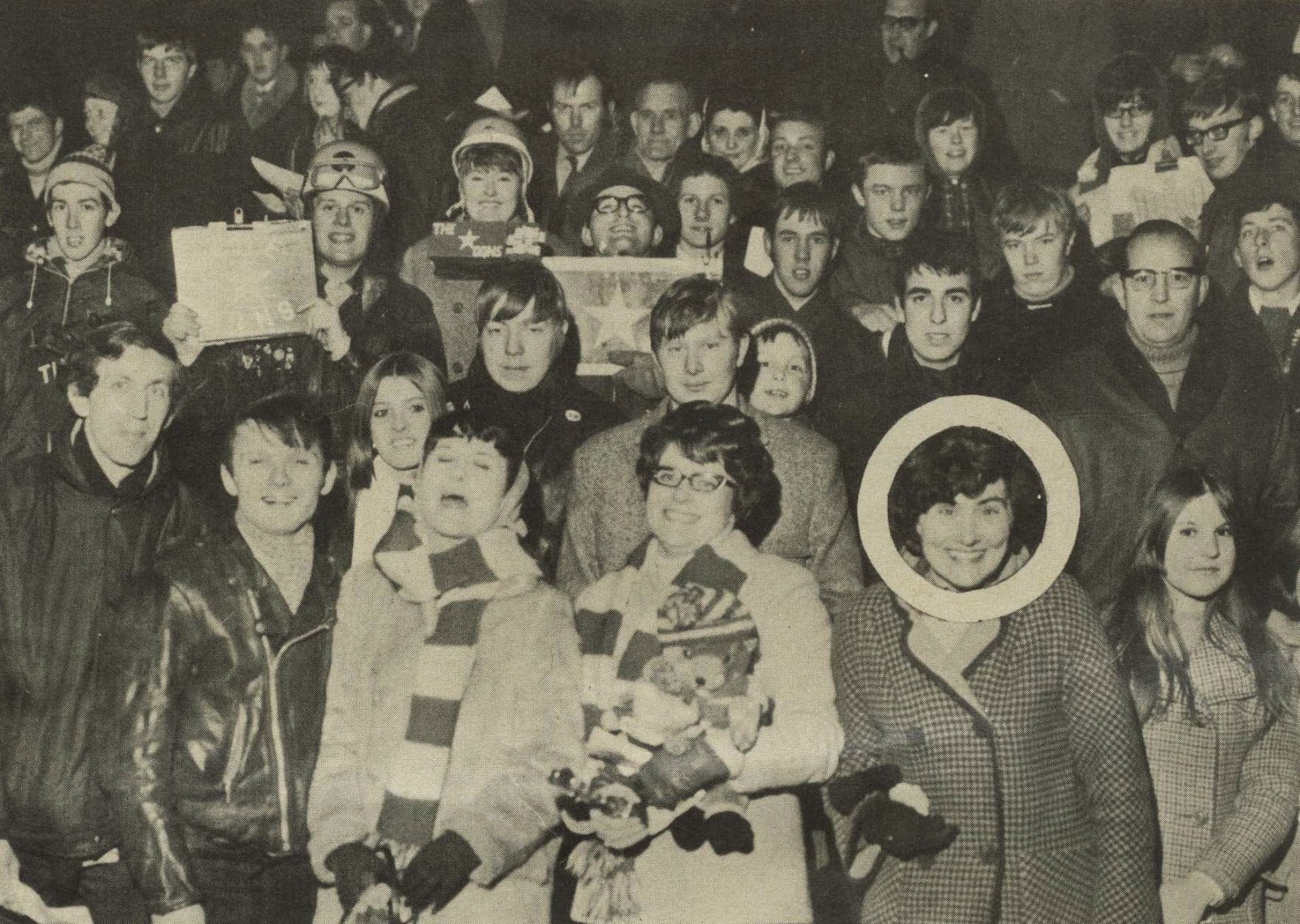 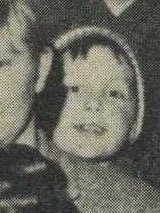 And Dad? When I came across these pages a couple of weeks ago, I initially assumed that he hadn't made it into this particular shot. On closer inspection, however, there he is, right up at the back, in the shadows, this time smoking his pipe.

Though neither of us turned out to be lucky winners back in the 1960s, rediscovering these old torn out magazine pages in 2015 is a pretty good consolation prize.

What incredible discoveries. You must have been taken right back there, seeing yourself and your dad in those shots. Speedway was really popular in those days, wasn't it? I do recall the name of one famous rider - was it Ivan Mauger or something like that? I never went to a meet myself but it was held every week at Eastville Stadium, home of my football heroes, Bristol Rovers. You didn't ever get that far, did you? Wonderful post.

This one is especially touching. I love it.

Me and my Daddy have been going to see the Gators play for the last 30 years. Neither of us lives where the games are played so...there's always been an element of adventure it getting there (Birmingham being the most recent).

I carry a ticket from our first game together (LSU 1982) in my wallet.

To find these pictures must have made your day.

SB. Ivan Mauger was very much the Schumacher of speedway in those days - a consummate professional and multi-world champion. No, we never made as far as Bristol, though we went to to meetings at Poole, Oxford and Reading while on family holidays.

Erik. That you carry the ticket from the first game you went to with your Dad with you at all times is just lovely - what a memento to have.

Very touching, Swede. It was our local college basketball team that brought my father and I together in my youth. He will have been gone for 20 years this October. Not having more photos from that special time is a big regret.

I love reading these family memories of yours. Never been a speedway fan myself though my home town, Sheffield has had some reknown in that sphere I know. I appreciate your blog = more power to your elbow.

Just catching up today... Such a lovely post and memories. Great pics - how brilliant to still have them.

In spite of not having what you'd call a close relationship with my Dad, I have really fond memories of him taking us out to watch Banger and Hot Rod Racing in a big field at a nearby village. There's definitely an allure to the smell of exhaust fumes and the squealing of tyres!

Brian. Fortunately for me now, Dad always enjoyed taking photographs, even later in life when his camera wasn't a particularly good one, so I'm lucky to have a pretty good family archive. I sometimes wonder what he would've made of digital photography.

Anon. Ah yes, The Tigers, I remember them well! Thank you for your kind words.

C. Dad did take me to banger/stock car racing a couple of times, but funnily enough neither of us got into it. It all seemed very chaotic!

Very touching post, Swede. It reminds me on my younger days in the mid 60s when my dad took me too the speedway events on Saturday in our hometown. This are one of oldest memories I combine with my dad. Sadly they closed the speedway ground to use it a football ground.

And try this song song by the forgotten Kursaal Flyers:
https://www.youtube.com/watch?v=dzMHpo--njc

Fabulous memories and brilliant pics it is so relevant when they say 'they can't take away your memories' Heartwarming!