I Should Watch TV

A recent post over at the ever wonderful Sun Dried Sparrows reminded me of the time I was browsing in an achingly (and I really mean achingly) cool, alternative bookstore in Brooklyn several years ago. It was a fascinating and incredibly arty shop, chock-a-block with obscure titles and with ferocious jazz blaring from the in-store sound-system. Anyway, I was nosing about the shelves, when a skinny young man stepped from behind the counter and approached me. He worked at the store and had recognised my English accent. This was a guy who wouldn't have looked out of place in the line-up of a cutting edge band - an impossibly cool individual. So you can imagine my surprise at the question he asked me. 'You're from England...', he said, '...do you know a TV series called Lovejoy?' 'Errrm...., yes...' I replied, somewhat taken aback, '...in fact parts of it were filmed not far from where I live'. At this, the guy's veneer of cool dropped. 'Oh my God, I LOVE that show...' he babbled excitedly, '...do you know when the third season will be out on DVD?' 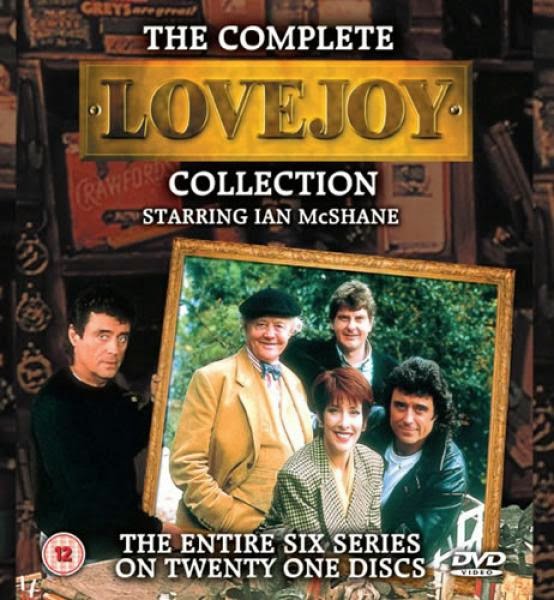 Yes, it transpired that this arty, uber-cool, bookish Brooklynite was a massive fan of the venerable East Anglian antique dealer and he proceeded to pepper me with questions about the programme for several minutes - fairly unsuccessfully as it happens, as I'd rarely watched it myself. His main gripe seemed to be that, at the time, only the first couple of series had thus far made it to DVD in the USA, so he'd had to rely on acquiring bootleg copies of the show to feed his habit! This was well before Ian McShane found American fame in Deadwood, so, to be quite honest, I was surprised to hear that any episodes of Lovejoy had been released on DVD in the States and frankly astonished that the programme was so admired by such a young hipster.

Now, what's that phrase about not judging a book by its cover? It seems particularly apt in this case.

Oh I can just picture the scene, brilliant. Of all the things you'd expect... a Bowie obsessive or a Monty Python acolyte I could have anticipated, but a *Lovejoy* fan...?! I'm often surprised at the degree of Anglophilia (if that doesn't sound like an illness... or worse..) I mean, I gather that Benny Hill was hugely popular over there too :-O
Then again, I suppose you can't get much more English than Lovejoy, can you?

Lovely to know my comet trail triggered this memory and post - and many thanks for the mention!

(I find St Vincent fascinating and talented and like her a lot... just unfortunately I don't feel the same about David Byrne!!)

Hi Swede. Fascinating subject. You would probably be surprised about shows that have played on PBS and other places here in America. I'm not much of a TV watcher now, but I had a particular love for low-brow sitcoms like The Young Ones, Keeping Up Appearances, Bless Me Father, Are You Being Served?, Take a Letter Mr. Jones, Blackadder, Fawlty Towers, The Vicar of Dibley, etc. Believe me, I could go on and on.

Have you tried Deadwood yet? It's McShane at the very top of his game.

C. Thanks for the inspiration! Bad news is that I do have another David Byrne related post up my sleeve - when I get around to it!

Brian. That's a diverse mixture of shows! Bless Me Father and Are You Being Served rubbing shoulders with classics like Fawlty Towers and Blackadder. It's interesting to hear how all of these programmes (and the dreaded Benny Hill!) were popular in the States, to some degree or another.

John. Still on the list. I'll get to it one of these days!

Loved the David Vid. I think I probably watch too much TV, in the evenings I watch all the latest movies etc.
I used to love Lovejoy and would like to see the lots of episodes I missed when abroad.
Deadwood I have never seen.
I am a Robot!

Apologies to C, but you don't have to apologize for a David Byrne post. There's a reason Annie Clark works with him so much.