The ska original of 'Artibella' appeared on Studio One in 1965, credited to Ken Booth & Stranger Cole (here). Boothe released his hit solo version of the song, produced by Phil Pratt, in 1970 (here). 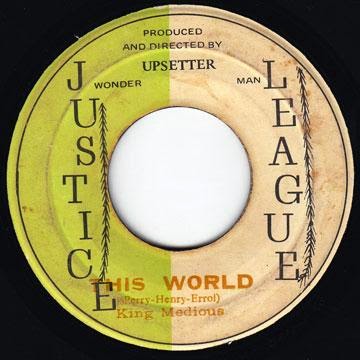 In 1972 Lee 'Scratch' Perry produced his own interpretation of the 'Artibella' rhythm with The Upsetters, initially bringing in Milton Henry and Junior Byles to voice 'This World' over it and releasing the results under the moniker King Medious. Several further adaptations of the rhythm would follow.


Hot on the heels of the duet, Byles was back behind the vocal mic alone, creating his classic reading of 'Fever'. At around the same time, the song was also voiced to good effect by Susan Cadogan.


The versions poured out of the Black Ark. Here's Jah Lion with 'Hay Fever'.


There are more, but let's conclude this brief whistle-stop tour with a typically bonkers dubwise excursion on the 'Artibella' rhythm, 'Fever Grass Dub'.

Fabulous on all counts. Your knowledge of Scratch and reggae in general always astounds me. Junior Byles is one of my all time favourite singers. Will be returning to this post throughout the weekend it's so bloody red hot. 'Hay Fever'! Good old Lee has a great sense of humour.

I'm no expert, just a fan doing what we all do - hearing a tune and burrowing a bit further in search of more information. Glad you enjoyed this one, it's been on the back burner for a while.

Loved the songs you gave us - especially Junior Byles.

Great post today. I'm with Singing Bear on this one, these reggae posts are always filled with so much interesting information that I was not aware of beforehand. There is nowhere near enough reggae posted in blogs.

Brilliant was going to do somthing but I am deep into a Reggae session now....got a big file on Spotify and there are a few here which will be a great addition....fantastic TS