Nan, my Maternal Grandmother, was born in Stratford in the East End of London on the 19th of January 1893, 122 years ago today - a time when the first controlled flight of an aircraft lay 10 years in the future and the sight of a primitive motor car on the streets of the nation's capitol was still an incredibly rare event. As a child, she grew up in a house with no electricity, no gas, inconsistent running water, a rudimentary coal stove, a tin bath hanging on the wall and a toilet in the backyard. By the time she died, she'd survived two world wars, outlived two husbands, given birth to one child and watched men walking on the moon on her own colour telly. 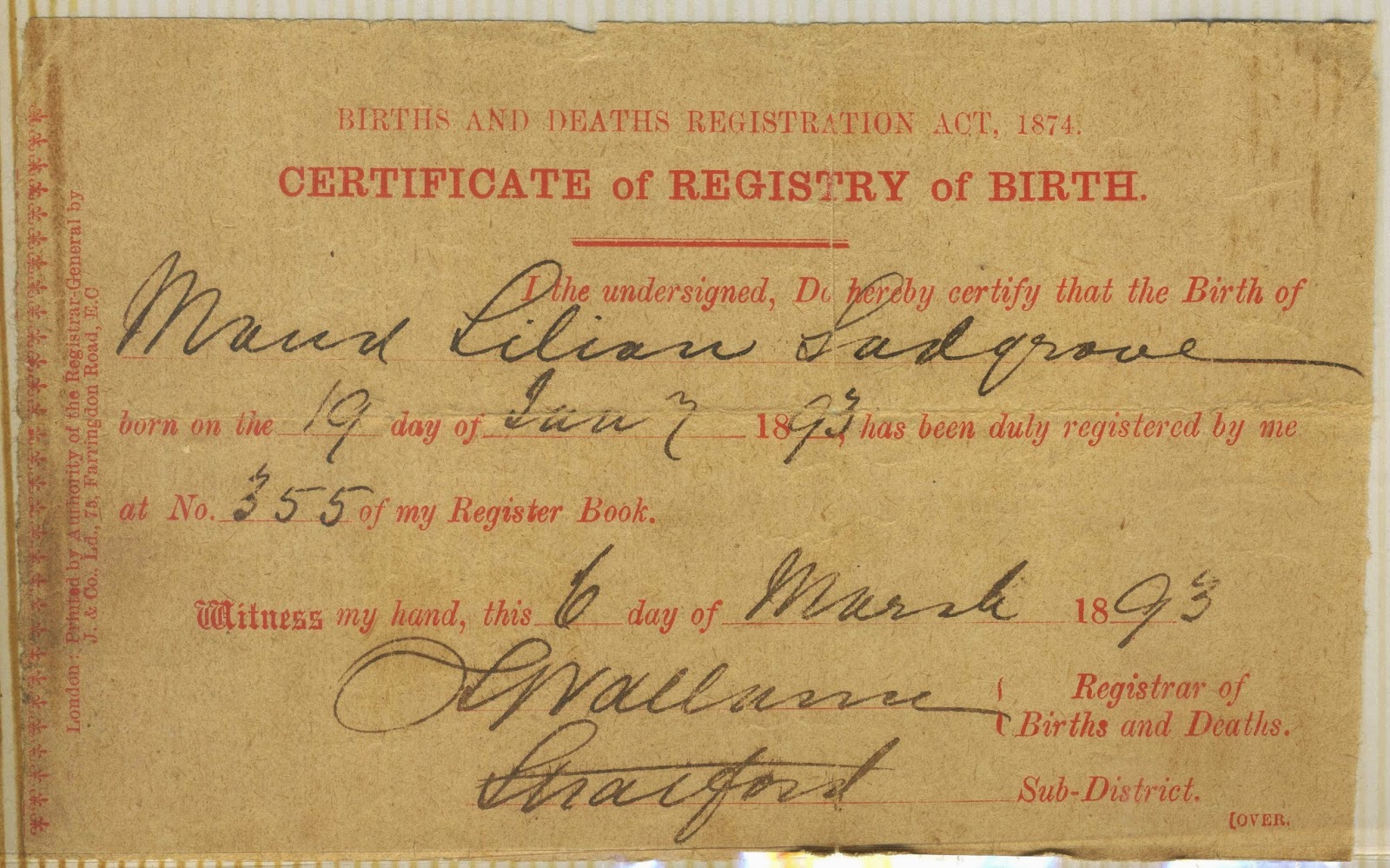 Nan was 67 when I arrived on the scene in 1960, dying a couple of days short of my 16th birthday in 1976. I spent a lot of time with her when I was a kid, particularly during the mid-1960s when both my parents were working. Her vernacular was an anachronistic Victorian Cockney, liberally sprinkled with odd turns of phrase that my Dad always referred to as 'Nan-isms' (a subject I've previously touched on here and I'll devote a whole post to one of these days). Her kitchen was always 'the scullery', my pyjamas a 'pyjam-suit' and, in later years, a 50p coin was a 'silver ten-bob note'. 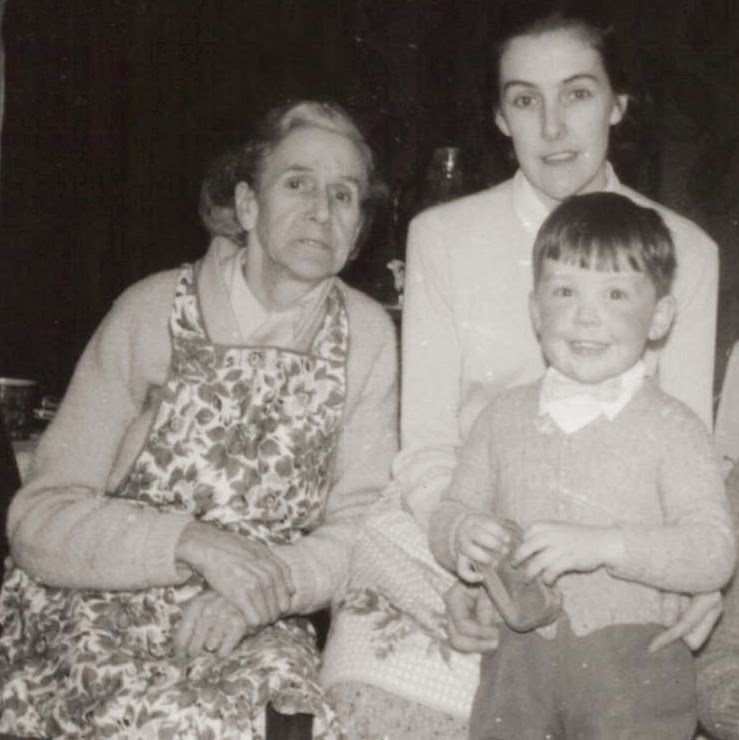 When I was being looked after by her, Nan's favourite trick to keep me engaged and, no doubt, out from under her feet, was to sit me at the table with pencil and paper and and give me a subject, often just one word, upon which I would write a story. When I was done, she'd sit opposite me as I read it to her, then she'd dream up another subject to repeat the process. My young imagination was vivid and I loved to make up stories, so this would literally keep me amused for hours. Meanwhile Nan, wearing her ever-present pinnie, might fill the coal scuttle, scrub the doorstep or potter around in the scullery, perhaps baking a cake, before inviting me to scrape out the sticky leftover cake mix from the bowl with my finger. Then I would ask her for new subject, sit down at the table and begin another story. 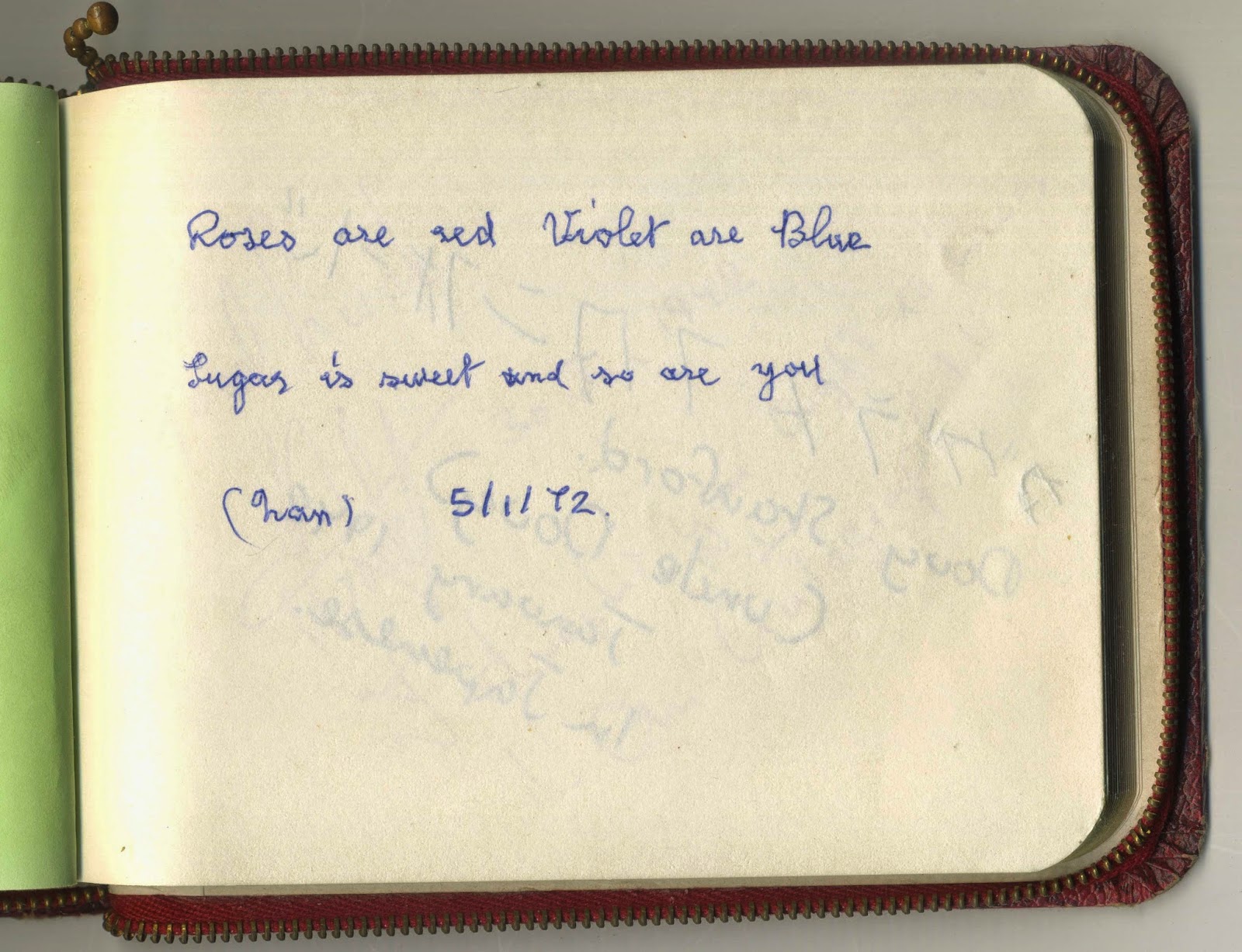 A treasured inscription in an old autograph book

After the Sex Pistols there was The Rich Kids and after The Rich Kids Glen Matlock formed The Spectres with ex-Tom Robinson Band guitarist Danny Kustow. The short lived combo gigged heavily while pursuing both David Bowie and Alex Chilton as potential producers, but ultimately issued just two singles, both in 1980, a cover of Ray Davies' 'This Strange Effect' and this, their own, 'Stories'.

Sounds like your nan was a gem. To have such memories must be one of life's greatest gifts. More on Nan, please.

What a lovely Nan and a lovely story. I was very touched by her excellent idea of giving you subjects to write about, what a great way to encourage a child's imagination and command of language too, and because it was for her I'm sure you wanted to make it as good as possible. I'm sure it helped to nurture your lovely flair for words as demonstrated here on UOTS too.

Nice to hear and nice to hear such great memories of what would appear a fabulous woman. We can'ot imajine what these people went thru without complaint. My Grandfather had a toucg life as a Trawlerman and lived until his ninties.

C. Thank you. Unfortunately whatever flair for words I had, abandoned me long ago. Where once there was a steady stream, now there is but a trickle.

Old Pa. I believe you've mentioned your Grandfather before, wasn't he based in Lowestoft for a while? It'd be great to hear more about him.