I think I may have unwittingly alarmed a few people when I mentioned in the previous post that I'd reduced my 7" singles collection by such a large amount. To be fair, the majority of those records were never really a part of my collection as such. What usually happens is that when browsing at car-boot sales and flea markets, I pick up a handful of interesting singles and the stall-holder says words to the effect of 'you can have the whole box for a fiver'. He's clearly seen me coming and knows that I am physically unable to resist. The long and short of it is that I end up back at home with the handful of singles I originally wanted, plus a box of old rubbish. These boxes have accumulated over time, hence the long overdue clear out. I foolishly sold a lot of my really good 7" singles (along with too many great LP's) several years ago, when times were hard and cash was sorely needed. Agghhh...it pains me to think about it even now. But I've still got a small clutch of singles that are like little polaroid snapshots of a moment in time to me. I'm out of town on Bob Dylan, Robyn Hitchcock, Soak and Rozi Plain related business until early next week, so I'll share a selection over the next couple of posts, while I'm away. 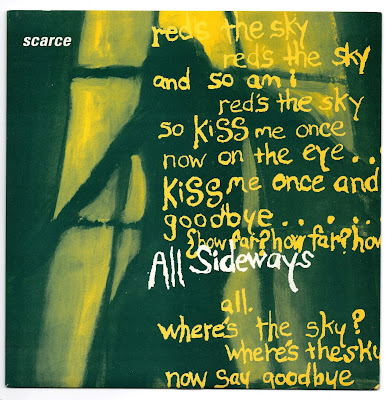 First up is 'All Sideways', a 1994 single on Domino by American trio Scarce. The band morphed out of Anastasia Screamed with whom I'd been impressed in the support slots I'd caught a couple of years earlier. The Scarce story was nearly over before it began though, when front man Chick Graning almost died after suffering a brain aneurysm in 1995, which required him to totally re-learn how to walk, talk and play guitar. He somehow managed this herculean task, only for the band to split in 1997. Back in the Summer of 1994, I played this song to anyone who would listen.

Like you, I have been forced into selling huge chunks of my prized record collection. The first time was for much-needed cash, and the second time was for practical reasons when moving to Wales. MrsRobster insisted we could not take it all with us and any argument I made against hers failed spectacularly. She was right, of course (as she often is), but like you I do shed a tear when I think back to what I no longer own.

Sounds like you have a great week ahead of you Swede. Enjoy

Saving all your texts and emails while also selling records. It's all coming out now.

Swede,
I have been pretty lucky. I haven't had too many sell offs. I used my records as currency in college but only as trade for new records I wanted but couldn't afford. It was usually about a 3-for-1 proposition. In high school I sold all of my Smiths singles (and I had them all) to fund a fancy night out at prom. So, I don't own Jeanne on vinyl, and that hurts a little, but I did end up marrying my date seven years later.

I know what it means to sell things that accompanied you in your lifetime. Fortunate circumstances I was never in the situation to sell any of my record or books. They followed me to any apartment I went to.