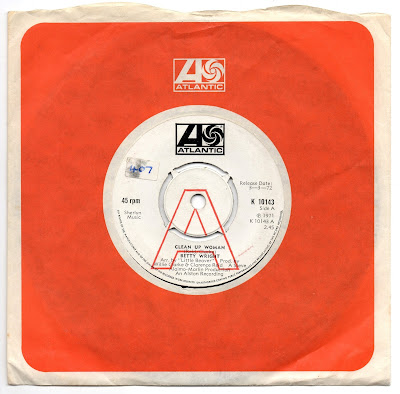 During the 1970's and 1980's, Radio 1 broadcast their own version of the venerable Radio 4 staple 'Desert Island Discs', re-christened 'My Top Ten'. It was a programme aimed squarely at the young music-loving fraternity, where the weekly guest (normally a pop or TV star) would choose his or her ten favourite records and chat a little about their life in the spotlight. Marc Bolan appeared on the show in 1973 - I've still got a tape of the show in a box somewhere. Tellingly, he selected a track by Gloria Jones among his ten. We didn't know it at the time, but he and her were about to become a public item. Also on Bolan's playlist that day was 'Clean Up Woman' by Betty Wright, a single taken from her second LP, 'I Love the Way You Love'. Apparently Marc was so enamoured of the song that he gave a copy to Noddy Holder, suggesting that Slade record a version of it. That would've been an interesting cover.

You're right - that would be a very interesting cover by Slade a band that I loved in my very youngest times.

They would have to change the title to Cleeen up Woman....Bob concert reports so far look promising...will look forward to your reports!!!

A great record.One which would have been fun to hear Noddy sing

An old favourite, Mr. S! It really takes me back to my first job at a record shop for some reason.

Remember when Noddy & Jim played at being Django & Stephane - Kill 'Em At THe Hot Club Tonite? I reckon they could've tackled Clean Up Woman in a similar style.

I must dig out the cassette of the show to remind myself of the rest of Bolan's selections. ' Kill 'Em At The Hot Club Tonite'? My favourite Slade track.