An occasional series, focusing on flipsides.

Marie, over at the consistently excellent It's All in the Grooves, recently posted Tommy Roe's 1963 hit 'Everybody', which inevitably set me thinking about Teenage Fanclub's appropriation of large parts of the tune as the basis for their own 1996 track, 'Kickabout'. I asked Marie if she'd ever heard 'Kickabout'. It turns out that she hadn't at the time, but I think it's safe to say that she was less than impressed when she did catch up with it! I have to confess that I'm somewhat surprised that Teenage Fanclub failed to acknowledge the pretty obvious, ahem, inspiration of Roe's original on their own composition, but I've always loved its lightly psychedelic joie de vivre nonetheless. 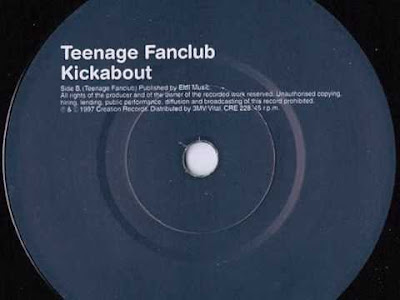 'Kickabout' initially cropped up on a surprisingly good Euro 96 related compilation, 'The Beautiful Game', before reappearing the following year as the b-side of 'Ain't That Enough', the first single taken from my favourite Teenage Fanclub LP, the mighty 'Songs From Northern Britain'.

An interesting post, Mr. S - and thanks so much for the generous shout-out! You're right about my not being too impressed with their unacknowledged appropriation of "Everybody" - nothing can induce a Marie-style rant like a blatant rip-off. Roe's song was recorded at the great Fame studios in Muscle Shoals, Alabama.

I don't have 'Songs From Northern Britain.' Criminal. Going to rectify that one today. Great post. Swede.

I'd like to say that 'Kickabout' is an homage, rather than rip-off Marie. Unfortunately the band's lack of proper credit makes it difficult to sustain that argument.

Swiss Adam. Their quality threshold is high, but it's certainly my personal pick of the bunch.