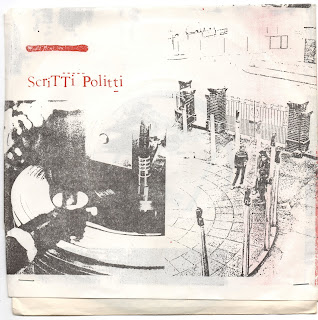 My family moved out of London in 1975 and wouldn't you know it, no sooner was I was safely away up the A12, than lots of exciting stuff started to happen in the capitol - even in the bit where I used to live. The Punk movement grew over the following 18 months and crucial new record shops began springing up all over the place, including Small Wonder in my old hometown of Walthamstow. Over the next few years, my trips back to visit friends took in as many of these record shops as time and cash flow would allow. One destination I rarely missed was Rough Trade Records in Ladbroke Grove, initially at 202 Kensington Park Road (now a 'Shabby Chic Couture' shop - it makes you weep) and later at 130 Talbot Road. I bought some great records at Rough Trade on those trips and would usually also pick up the latest issue of Sniffin' Glue or Ripped & Torn fanzine to read on the train ride home. Just thinking about the full to the brim, Aladdin's Cave nature of the place in those days makes me curse my current lack of a fully working time machine. Most of those early purchases are sadly long gone, but a precious few still nestle in my collection. Like this one for instance. In my mind, I picked up 'Skank Bloc Bologna' by Scritti Politti on a 1978 visit to the old shop, but Rough Trade relocated to Talbot Road around that period so I can't be sure. It was all a very long time ago, but this record still sounds utterly fantastic nonetheless. (This one's for you Brian.)

Yes, a truly great record. It was cool when Green went all 'pop' (note quotation marks) with Songs to Remember but he lost me after that - some more avant post-punk would have been more to my liking. Bristol was never blessed with as many fine record shops as The Smoke, obviously, but a shout out for Tony's, Replay and Revolver (as featured in the very fine book, 'Original Rockers', by Richard King, which is well worth reading) would not go amiss. 'Ripped and Torn'! I remember it well - used to get mine from an old comic book shop called Forever People. The days of the fanzine were peak times for us all.

You bought the single "Skank Bloc Bologna" AT the Rough Trade shop? Wow! Now that's a time machine moment. I am full of envy this morning, Swede. Much better than that Scritti Politti Turntable Mix that had your good lady running for the exits not so long ago. Thanks for the dedication.

Ha! George, you crack me up.

This is a truly outstanding single.