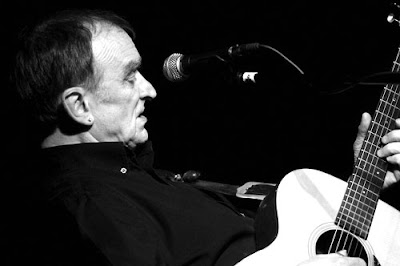 Looking back through my old emails (I never delete anything), I note that the first concert ticket I bought for 2015 was actually purchased on December 28th 2014. The gig in question was the great Martin Carthy, who, back in February, played to an audience of around 200 in the beautiful surroundings of a 17th Century octagonal chapel.

Earlier today I booked my first concert ticket for 2016 and once again it's for Martin Carthy, though this time I have to wait a full five months, until mid-March, for the show. The venue on this occasion is a tiny basement room where I've previously seen both Hot Feet and David Thomas Broughton. Capacity? I reckon if they try to squeeze more than 75 through the door we'll have to hold our breath.

One of the many highlights of Martin's performance in February was his solo interpretation of 'Her Servant Man', a song originally recorded with his daughter Eliza on their 2014 LP 'The Moral of the Elephant'.

Envious? Yes, I am. Equally, I'm astounded that you never delete an e-mail. Uh?

Perhaps I should've said rarely, though when my old mobile phone died it still had about 3000 undeleted old texts on it. Do you see a theme developing?

Oh, yes I do see a theme developing and I am a little concerned! I didn't even think a phone could hold that many texts.
Delete, delete, delete! You won't regret it, honest. Except for maybe, briefly, the odd one or two. Oh... I see...

But..you could think of them as phone conversations? - once they've been said, they're gone forever.

I love Martin Carthy's music, Mr. S, so I'm very envious. Small venue concerts are ideal, and one held in a beautiful 17th century building would never be forgotten!

I used to think you should save emails and texts but eventually I just started deleting them. Apart from the odd few. Delete delete. And I am a man who can live with clutter
Swiss Adam

Haha, fear not chums, I'm not some weird hoarder of messages sent through the ether - it's just that I rarely think to delete them. My mobile phone before last (which was in fact my first ever mobile phone, purchased c.1995) only allowed me to keep 10 old text messages, so of course I had to delete as I went. By the time I purchased my second phone a full 12 years later in 2007, technology had come on a tad, it had more storage for texts and never prompted me to delete any, so I rarely did, hence the 3000 (I got 20-30 work related texts per day at that time). This year, when that one finally died, I got my third phone, but I rarely get any texts these days and do my best to delete as I go.

Hi Swede. Remind me, do you get good shows where you live, or do you still need to travel quite a bit to see the artists you like? I remember you saying you used to organize trips when you had the shop, and I know many of the shows you recall fondly were in London too.

Hi Brian. We have a good range of venues fairly locally, only about 20 miles away. When I was younger I travelled a lot further though. For instance, when The Clash played their 7 night stand at The London Lyceum in 1981, a 140 mile round trip at the time, I went to every night, worked the next day, before doing the same thing again that evening. Makes me tired just thinking about it now. I'm actually going down to London next week to see Bob Dylan at The Royal Albert Hall for a couple of nights, but I'm staying with a relative this time.

I'm not a jealous type of guy (I think Brian Ferry din't say that)but some of the gigs you got make me rather green!! Lucky old you TS keep up the gigging!

I just see you are going to see Bob (again) now I am jealous guy (Bob said that!)....have you ordered your 18 CD set yet.....22 takes of Please Crawl out Your Window I cant wait.

I would love the 18CD set Old Pa, but it's a bit beyond my means, especially with Bruce's 'River' box coming this side of Christmas as well. I'll report back on the Bob gigs next week, all being well, though they're immediately followed by Robyn Hitchcock on Sunday and Rozi Plain on Monday, so I might need a little sleep first!

Bloody 'ell TS don't rub it in! fantastic, enjoy the ride and can't wait to hear the reports....if there is a next time I will definately come over for Bob.