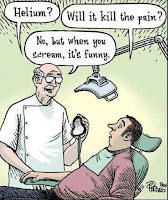 A short while after penning this post in 2012, I had a little rethink. I tried to work out exactly where I was and who I was with the last time I went to a dentist and, following a quick recalculation based on those facts, realised that my last visit wasn't in in 1987 as I'd initially estimated, but actually in 1983. A couple of weeks ago I finally plucked up the courage, signed up to the same local dental surgery as Mrs S and went along for my first check up in 33 years. My new dentist, who wasn't even born the last time I set foot inside a surgery, expected the worst as I opened my cake-hole for inspection, but, with a couple of exceptions, was pleasantly surprised at the state of my molars. Yesterday I had a filling, taking care of the lesser of the problems he found. I was utterly terrified, but was a brave little soldier throughout the process. The other discovery made by my dentist came as no surprise, indeed I alluded to it in that post 4 years ago. A tooth at the back has crumbled beyond repair or possibility of normal extraction. It's never given me a moment of pain or discomfort, but surely will one day, so it has to be dug out - and it'll be a nasty job. I'm awaiting an appointment later in the year with a specialist, for which I will be given sedation. It'll be messy, but it's my own fault.

Here are Chatham's finest and the only Dentists I've ever really cared for, with their classic début single from 1985, 'Strawberries are Growing in My Garden (and It's Wintertime)'.

Funily enough I visited the dentist yesterday for my routine 6 months inspection and clean.
10 mins later I was out into the sunshine. All clear and that nice clean tingling feeling. 65 euros lighter. So that makes it 6.5 euros a minute. 390 per hour. If he does 37.5 hours a week that means 14,625 per week. Now that is only a week....you do the maths. I am in the wrong job. No wonder he has a top of the range Range Rover parked outside.

Love the cartoon. And great choice of song too - fond memories of seeing the Dentists at our local venue all those years ago.
As for dental work... I do sympathise... but it will all be over soon and you'll be able to wear a dental badge of honour. Wishing you the best of luck - it sounds like you'll be in good hands and I do think dentistry has come a long way in 30 years too.

A few years ago I had to have a tooth near the front extracted and replaced with a permanent false one - through no fault of my own, I'd maintained my teeth well! - root canal and bone extraction, the lot, the whole process took several few months and cost me nearly £1000! But I dined out on it for a few weeks and awarded myself an imaginary medal, so it wasn't all bad ;-)

Old Pa. Blimey! It makes you think. We're definitely in the wrong business.

C. Well I have to admit that I was hoping for a gold star to stick on my forehead for being such a brave boy with the filling - apparently they don't do gold stars for 56 year-olds though!

Sounds like your teeth held up pretty well for all the time you waited, though.

My dentist says that in the end, it's most luck and a little bit genes. As soon as I heard that, I went back to chewing aluminum.

Seriously, though, I hope that abnormal abstraction goes okay. With the right dentist it's all rarely as bad as we fear.

Hi Nasreen. Yes, my new dentist was pretty surprised! I've always looked after my teeth though and visited the dentist regularly until my horrendous experience in 1983. If that one rotten tooth had given my any bother in the ensuing 33 years I would certainly have set aside my fears much earlier. Interestingly, my Mum died at 77 without one of her original teeth left, yet my Dad died at the same age with a complete set intact. I guess I must take after him more than her in that area.

First off, love those early songs from the Dentists. Great pick. As for your tale, I immediately thought of my late father. He, too, avoided the dentist for most of his adult life. He finally did have a problem that forced him to go. When he turned in his paperwork to the technician she asked why he skipped the question about the last time he had his teeth x-rayed. He replied that there was no such thing as dental X-rays the last time he went to the dentist. Hope all goes well in the chair, Swede.