I Will Play This Song Once Again

I appreciate that some of us have got this record collecting bug worse than others, but who among us would be capable of resisting the chance to own a true rarity by one of our own favourite artists? And by true rarity I mean a very limited, personalised edition - of one copy. Step forward I Will Play This Song Once Again, a record label specialising in excruciatingly limited, personalised releases. Some of the singles in their catalogue have editions of just 5 copies, though my own purchase, 'What Have They Done To You Now?' by Daniel Knox, had a massive run of.....35. This means that Daniel recorded the song 35 times, each a one-off individually cut performance, prefaced by a brief spoken introduction, which in my case was a dedication to me using my full name (pronounced absolutely correctly - believe me this rarely happens) followed by the date and time of recording - four o'clock one morning in December since you ask. 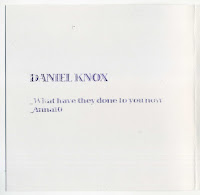 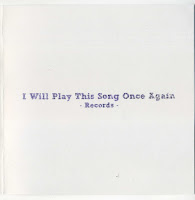 The original recording of 'What Have They Done To You Now?' appeared on Daniel's excellent 'Disaster' album in 2007 and is revisited on my single in a very dramatic, rolling reworking - a unique performance, quite literally. I'd love to play it for you, but it's mine, all mine! Here's the original though. Check out more of Daniel's terrific music here.

Labels: Daniel Knox, I Will Play This Song Once Again

Incredible. Swede. I don't have anything so personal or so rare.

And I see you had the birds going again this week. Beautiful. I'm a bit behind in my reading. Good stuff.

Thanks Brian. It's a great song too.

Now how much? was it worth it? lets hope he gets the fame he deserves and gets bigger than Dylan and in 40 years time it may be worth lots and lots of money. Seriously if you are in to an artist, something to cherish.

It's all about the music Old Pa. I saw Daniel on his 2016 UK tour with The Handsome Family, but sadly he didn't come to my neck of the woods on his latest visit. Hopefully next time.