Roll Out the Welcome Wagon

Almost exactly a year ago I posted a few shots (here) of a collared dove who'd elected to set up a nest in a very precarious position. Sadly, on that on that particular occasion, the eggs were lost in the storm, though I'm happy to report that the family were more successful in the same spot a little later in the year. I happened to glance over at the same stretch of our neighbour's guttering a couple of weeks ago and noticed a dove sitting on a nest right over the downpipe, exactly as that one did 12 months ago. Yesterday afternoon, as I walked past an upstairs window, I spotted some movement across the way - it was a proud parent gently encouraging a recently hatched youngster to take a stroll along the gutter, while another egg sat temporarily abandoned back in the nest. Never fear though, shortly thereafter, one of the parents was back on the nest, incubating the second egg, so we're keeping our fingers crossed for two out of two. (Click on the photos to enlarge) 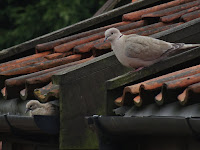 As we're rolling out the welcome wagon for the new arrival, it seems an apt moment to share a tune by the Asthmatic Kitty recording artists of the same name. The duo's 2008 début, 'Welcome to The Welcome Wagon', was produced by Sufjan Stevens, who also put in an appearance on the 2012 follow up, 'Precious Remedies Against Satan's Devices'. Album number three is due later this year. This is 'Sold! To the Nice Rich Man', originally released in 1999 by Danielson, another artist with a strong Sufjan Stevens connection.

Oh I share in your delight! Wonderful. Fingers crossed for the second egg. I read somewhere that males incubate during the day and females during the night, or is it the other way around?!
Like the tune too, very uplifting and apt.

Dove update: The second egg didn't hatch and has been abandoned. The youngster was visible on fences and roofs around the garden for a couple of days, but has now disappeared. Hopefully he or she is ok.