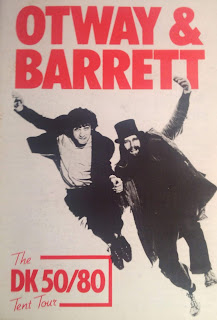 Doing a bit of catching up on the blogs. Listening to the Smoking Popes - absolutely tremendous, that's two albums going on the list

Tremendous tale. I always take to your stories from record stores. Love thinking about that tour too. Reminds me of Martin Newell and Nelson doing that Brotherhood of Lizards tour on bikes.

John Otway drinks in our local - he's been seeing a woman from Nottingham for the last couple of years and spends a fair bit of time up here.

I saw them a couple of times around then.
Always ramshackle but always entertaining

Once seen, never forgotten. A great wee anecdote there from your record shop days.