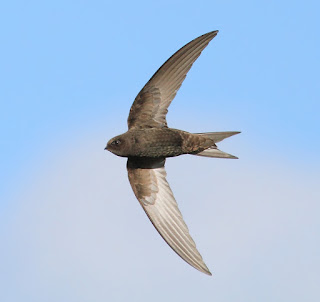 I've spent most of my walking time over the past couple of weeks looking upwards in vain for any early sign of returning swifts, walking into lampposts and nearly getting run over in the process. Yesterday morning I woke up and without even getting out of bed, saw three of them looping around in the sky through the dormer window! They have arrived! It's an annual event I've come to christen Richard Swift Day and May 5th is the earliest on record - or at least in the 9 years since I moved into Swede Towers and started keeping records. When the final swift disappeared from the local skies last July, I honestly believed it would be the last time I'd see them from this location, but with all thoughts of selling the house on hold for the time being, I now get to spend one more summer in close proximity with these amazing creatures.

Richard Swift died two years ago at just 41 years of age. He left a superb body of music of his own as well as production work for The Shins, Kevin Morby, Foxygen, Laetitia Sadier and, notably, Damien Jurado, for whom he produced the excellent 'Maraqopa' trilogy of albums between 2012 and 2016. Jurado released a fine new album 'What's New, Tomboy?' a few days ago, which contains 'Ochoa', a tribute to his late friend and collaborator Richard Swift.

Damien Jurado - Ochoa
Posted by The Swede at 09:45

I always await their arrival eagerly. This year they arrived early, on April 3. Guess I'll call it Richard Swift Day from now on, too.

April 3rd? Wow. When do they leave your neck of the woods?

No swifts, but our bird table is frequented by magpies, blackbirds, tits, pigeons, doves and a robin (singular). With the occasional acrobatic squirrel thrown in for good measure.

I'm a lot closer to their African winter haven than you are. Haven't a clue when they leave really, October/November probably.

Good to hear that you can enjoy the beauty of nature, Swede

So lovely... can't wait to see my first either. If they've arrived up your way they should be over my skies soon too. But the swallows are here, bringing some cheer.

What a lovely story. Will have to take more of an interest such things.

Maybe good that the house sale is on hold for now, see how things pan out but in the meantime enjoy the bird life.

You know how I feel about your bird posts. Try to look on the bright side and enjoy this last hurrah, pal.