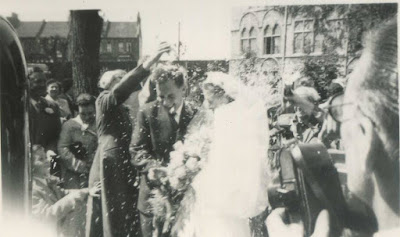 Here's a photo taken on June 18th 1955 - 66 years ago today. Mum and Dad, newly wed, being greeted with a storm of confetti outside St Andrew's Church, situated on the Barking Road in Plaistow, East London. They enjoyed a long and happy marriage until Dad passed away very suddenly in 2007, with Mum re-joining him in 2010. It was only when clearing my parents' house that I found their wedding photos up in the loft, buried in a box of general family ephemera. I'd never seen them before. I've previously shared my absolute favourite of the bunch, a beautiful shot taken at the alter (here) and whereas that one captures the solemnity of their vow-exchanging, today's example really exudes the communal joy and happiness of their big day.

To soundtrack the photo is an appropriately titled slice of the Bakersfield Sound, produced by Buck Ram and released in 1961.

Georgia Lynn - On Your Wedding Day

How lovely, there's so much energy in that shot, and the happiness of the moment is palpable.

Ah, loving both elements of this series. Keep ‘em coming.

What a lovely happy photo - A portent to a long and happy marriage it seems.

Don't you wish you could go back in time and be a fly on the wall on your parents wedding day, long before you were thought of, though, somehow.

Like the song - Very apt obviously but really evokes the era.

C. I originally cropped the shot to show just Mum & Dad, which was lovely in itself, but I find all the other stuff going on in the scene just as interesting. That's Aunty Bessie with her head bowed by the tree - she emigrated to Canada in 1964. The lady emptying confetti over Dad's head is Aunty Em, who only passed away in 2019. I'd love to know who the close up back of the head belongs to.

Brian. Thanks for the encouraging words - I'll try!

Alyson. It's sobering to think that were it not for a family tragedy that occurred in 1958, I might not actually be here at all. It's a difficult subject, but one I might write about someday.