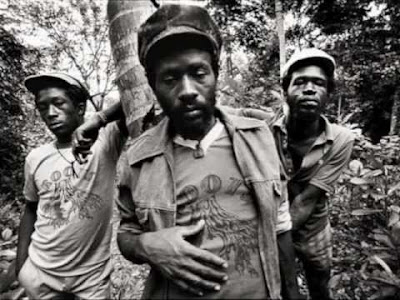 You may recognise 'Jah No Dead' from Winston Rodney's impassioned solo acapella version, sung over the sound of crashing waves in the 1978 film 'Rockers'. If you're unfamiliar with the scene, it's well worth a couple of minutes of your time (here). The original Burning Spear studio version of the song was released under the title 'Marcus Say Jah No Dead' on the 'Social Living' LP, also in 1978. Two years later an extended mix appeared on the flipside of the 12" single 'Free the Whole Wide World'.

Excellent selection to start the week. Thanks Swede.

You're most welcome Mr G.