Show Me Those Who Are Not There 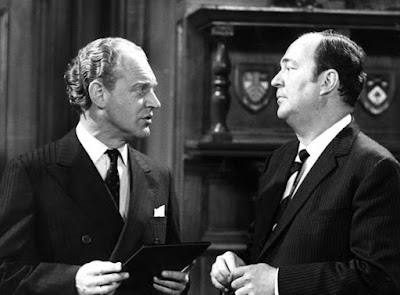 The shingles has lingered much longer than I imagined it would. I felt so guilty about being off sick during the busiest period of the year that I foolishly went back too soon, working three long shifts from 22nd December until Christmas Eve and then on Boxing Day. I somehow made it in the day after that, but had to come home after three hours, barely able to hold myself upright. I've been off again ever since. I'm hopeful of a more cautious return to the fray next week, this time easing in with short shifts to start with.
With so much time to kill, I initially tried listening to music or reading a book with limited success, agitated by the pain and fuzzy-headed from the painkillers. I don't have a TV, but I do have my trusty laptop and eventually found distraction by revisiting several television programmes of my youth via YouTube. I passed the hours reconnecting with episodes of such shows as Callan, Z Cars, Softly Softly Task Force, Quiller, The Sweeney, along with a few others from the 1960s & 70s, that I remember watching with my parents. The sedately paced Softly Softly Task Force was Dad's favourite back then, whereas I preferred the rough and tumble (and smoking...the endless smoking!) of The Sweeney. The distant familiarity of Barlow, Watt, Carter and Regan's respective adventures was strangely comforting, but my how the world has changed since I last watched them.
Robyn Hitchcock - Television
Posted by The Swede at 07:00

I hope you feel better soon, Swede. I remember my dad having shingles when I was a kid (he was probably around the age I am now); I don't remember him ever being more ill.

Still, that sounds like an excellent way of passing the time. I often dream of having time to watch the old TV shows I watched as a kid, and The Sweeney would be a good place to start... though I might be more drawn to Dennis's follow-up role, with George Cole in Minder.

I do something very similar when laid up; old episodes of Dixon Dock Green are far better than anything the doctor can prescribe.
G'night, all.

Damn, Swede, sorry to hear about not shaking the shingles. Feel better soon. Nice pick from Robyn though.

Hope you feel much better soon, you've had such a nasty bout of it, go easy on yourself! But some old TV therapy sounds just the ticket. 'Softly Softly' was a favourite in my house too when I was growing up, and you can't beat an episode or two of 'The Sweeney' for some classic dialogue...

Rol: I remember watching Minder from time to time, but I was at the perfect age for The Sweeney. Put yer trousers on....you're nicked!

John Medd: The pace of Dixon of Dock Green was even more sedate than Softly Softly as I recall. I'll have to give it another look.

C: What I particularly enjoy with The Sweeney are the scenes filmed out on the streets of London. I freeze-frame whenever I see a road sign and compare then and now via Google street view. Hours of fun when you're feeling under the weather!