That's His Kind of Blues 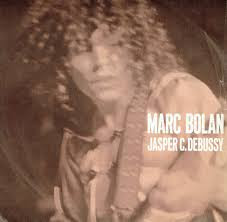 Jasper C. Debussy pre-dates Marc Bolan's short spell with John's Children by three or four months. The song was recorded by Simon Napier-Bell in the winter of 1966 as a proposed follow up to Marc's third solo single Hippy Gumbo, though it was ultimately shelved and didn't see the light of day until the huge early 1970's success of T.Rex encouraged Napier-Bell to dig it out, dust it off and cash-in. Key session musicians for the recording included drummer Clem Cattini, guitarist Big Jim Sullivan, piano wiz Nicky Hopkins and, rumour has it, a certain John Paul Jones on bass. The eventual 1972 issue of Jasper C. Debussy featured a '...go for keep cool y'know...' spoken intro from Marc, the meaning of which passed by this 12-year-old completely. It isn't the nonsense phrase it appears to be however, as his actual words had been censored by studio trickery. When the song re-emerged in 2002 as part of a reissue package, his original unexpurgated studio rant was reinstated, '...fuck off or keep cool y'know...!'
Marc Bolan - Jasper C. Debussy
Posted by The Swede at 07:00