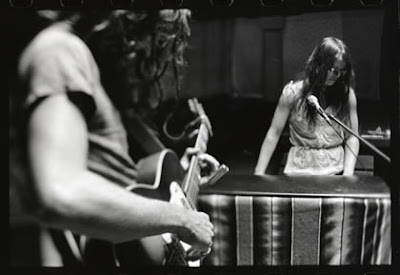 You know those hot, clammy days that we sometimes get in the Summer? Days when it's a genuine effort to move from A to B, when sweat sticks the clothes to your skin and cool fresh air seems a distant memory? The music of Brightblack Morning Light is the aural equivalent of one of those days. It oozes and slithers from the speakers, as if weighed down by extreme humidity. It feels positively oppressive - in a good way, natch.

I was walking through Mrs S's studio one day in 2007 when I heard a Brightblack Morning Light tune coming from her laptop. They were a new name to me and I was instantly hooked by the dense, sultry, airless sound. I quickly hoovered up both the available long-players, 'Ala. Cali. Tucky' and the self-titled follow-up. The band's third and final album, 'Motion to Rejoin', arrived in 2008.

My obsession with Brightblack Morning Light was brief, only by virtue of their catalogue being so slim. Their second and third albums in particular can be picked up relatively inexpensively and come highly recommended. Here's a track from each of them.

It's great to see someone else likes them as well. I never knew they had three albums, I have the last two on vinyl. They're great late night records I think, to take the edge off a day. My favourite is "We Share Our Blanket With the Owl" which is as good as its title.

I can vouch that the second album can be picked up inexpensively. I popped into my local second-hand record at lunchtime and there it was in the "10 for £5" box, so I acted on your recommendation.

New to me and I enjoyed both songs.

I'd go with oppressive; but in a good way. Thanks, as ever, for the steer.

Feeling the love for Brightblack Morning Light today. Thanks for listening and chipping in folks.