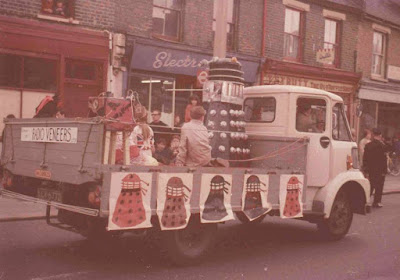 When I was a kid growing up in Walthamstow, one of the highlights each Summer was the annual carnival parade, in which a long line of decorated flatbed lorries snaked around the town's streets, via the end of my road, raising money for local charities. Every year my folks would walk me up to the corner, give me a few coins to throw into a collection bucket and encourage me to shout my head off at the colourful passing show. It was all unspeakably exciting. In 1965 Dad took some photos of the event, including this one.

Of course in the cold light of 2022, the visual evidence Dad managed to capture all those years ago, pricks the bubble of my hazy youthful memory. The floats and flatbeds slowly making their way through the crowds along Markhouse Road aren't the professionally reupholstered vehicles that I thought I remembered, but are actually amateurishly decorated old warhorses, crudely festooned with multicoloured crepe paper and hastily handwritten signs - no doubt held together by endless reels of sticky tape. It should be noted however, that a long forgotten hero did make a rather splendid effort when it came to creating that Dalek - credit where it's due.

My overriding memory of the carnival, sadly not captured for posterity, is that, standing at the junction of Markhouse Avenue and Markhouse Road, you could hear the whole shebang coming a mile off. Pots, buckets and old tin dustbins rattled with coins and were bashed together to ramp up the atmosphere - the shouting, crashing and honking of horns becoming louder and louder until the whole deafening parade was right in front of us. And then it was gone, gradually fading away into the distance until the following year.

This from Niagara's third LP, 1973's 'Afire', is a somewhat more rhythmical approximation of the sounds I heard for a few minutes each year, while standing at the end of my road.

Nice Dalek! In my old hometown (Torrington in North Devon), we had the annual Mayfair festivities throughout the first week in May. Torrington Carnival took place on the Saturday night. You couldn't move in town as literally everyone would be outside watching or taking part. The pubs were rammed most of the night and most people would have throbbing heads the next morning.

The Town Band and Majorettes headed the parade which would take the best part of an hour to pass at its peak.

Not sure what it's like these days - haven't been back there to see it for more than 20 years, but I fear like most things it has suffered owing to increasing insurance costs brought on by Health & Safety concerns. Certainly, even by the early 90s, it seemed as though fewer and fewer floats would pass by, the whole thing over in half the time it used to be.

Your memories and the picture are just brilliant. They must have had so much fun making that Dalek, sink plunger and all! I love the handmade sign for Radio Veneers Ltd - even that name just sums up the time.

Great picture and in colour too. I have similar memories of our local Gala Week celebrations but sadly my pictures are in black and white. I used to be on the Brownie lorry and there was a different theme every year. I think I was Alice in Wonderland one year but of course around 50 Brownies on the back of a flatbed lorry, with few health and safety features - Just couldn't happen nowadays.

The dalek creator did a very good job. Great that we still retain these memories all these years later. My mum and dad and their friends were the organising committee in our village but once commuters from the city moved in, they wanted to take over and make it much more professional. Needless to say, something that had been going for decades folded shortly after. Very happy memories though.

Superb photo, recollection and comments. I was also struck by the sight of "The Old Toffee Shop" just behind the front of the truck. Another of those wonderfully specialist family businesses that I guess may be long gone now.

I also love the sight of the two children watching from the window in the top left corner. A perfect snapshot of a moment in time, thanks for sharing.

TheRobster: Apparently the Walthamstow carnival eventually disappeared in the 1990s (not a bad run considering it began in 1896) and was briefly revived in 2008. Ah yes the brass bands and majorettes - I remember them well!

C: Yes, each float was a low budget labour of love!

Alyson: The more I think about it, the more health and safety (or rather the lack of it!!) comes to mind. The dalek is unusually impressive for such an event isn't it? No doubt that's what prompted Dad to grab a shot of it.

Khayem: That's the local sweet shop, Strutts - a Walthamstow institution, still remembered fondly by those of a certain vintage. They also had a stall in the market. That side of Markhouse Road was raised to the ground not long after we moved out in the 1970s, but it's amazing how vividly I remember the individual shops, even after 55+ years. Do you know, I'd never noticed those kids at the window until you pointed them out.