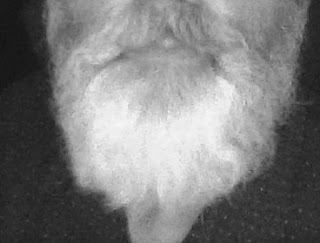 The beard, should you be at all interested, is still hanging in there (see the rather fuzzy image of my rather fuzzy chin above). It's now been over six months since I last shaved and, barring clipping the odd solitary rogue whisker, I've not touched, trimmed or styled the facial growth in any way. Come to think of it, I've not had a haircut since the beginning of January either. Liberating or laziness? Perhaps a bit of both. One thing's for sure though, however much the beard itself may irritate me at times, I really am enjoying not shaving.

Here's an appropriately titled chunk of classic 1974 Canterbury-scene prog from Hatfield and the North.

Hatfield and the North - Shaving is Boring

Reminds me that I've been meaning to tidy my beard up for a few days now. Agree about not shaving.

That's quite a Robert Wyatt you have going on there! Must be very liberating, good on ya.

Good work there. I think there's definitely a work/life balance to be found somewhere in the middle between time spent shaving and time spent beard/moustache grooming.

I'm still opting for the daily shave as previous beard attempts haven't really suited me and stubble only makes me look like I've probably spent an equal amount of time skipping showers, clean clothes and other forms of self-care...!

I think it's fair to say that, after nearly 9 minutes of Hatfield And The North wiggy workout, anyone would find shaving boring by comparison. Great stuff!