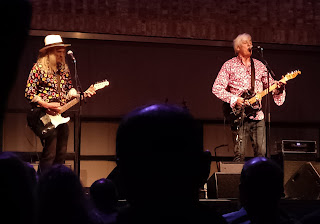 Kimberley and Robyn on stage in Cambridge last week

I've just finished a lengthy uninterrupted run of holiday cover shifts. There have been a few long stretches of late, thanks largely to Covid sweeping through the store, though it's usually a mixture of earlies and lates. This time it was all earlies, meaning 5am alarm calls every day. It's not too much of a chore getting out of bed at this time of year though to be honest, the sun is already up and the loud birdsong eases me into my first coffee of the morning. My problems start at the other end of the day. I get home by 5.30pm and after a shower and a meal am struggling to keep my eyes open by 7.30. I'm usually in the land of nod by 8. What a lightweight I've become!

You can count the number of gigs I've been to since lockdown on the fingers of one hand, but, much like buses, two rolled up together right in the middle of this intense period of work - neither of them local. First I undertook an 80 mile round trip to catch Modern Nature in Ipswich. 'Island of Noise' was one of my favourite albums of 2021 and I was thrilled to learn that the band would be venturing out East during their tour. The Smokehouse is a standing venue and Modern Nature's music can be quite subtle, not an ideal combination when it's way past your bedtime! It was a terrifically engaging performance though, the sort of show one felt privileged to be in the audience for. Highlights included the epic, Spiritulized-esque 'Build', which concluded the set in magnificent fashion and the Sea and Cake meets Neu! bliss of 'Performance'.

A couple of evenings later I took my weary bones over to Cambridge for the final date of Robyn Hitchcock's UK tour. As I've mentioned many times recently, Robyn has been elevated from mere musical hero to a somewhat mythical status in my affections, thanks to the ongoing series of streamed gigs he's performed with his wife Emma since the very start of the pandemic in March 2020 - now in excess of 200 shows! Emma has often spoken about how much these weekly shows have helped them cope over the past couple of years, but I only wish I could adequately express to her just how much they've helped me (and no doubt many others) cope too. In Cambridge Robyn played solo at first, then with assorted guests, including Emma and fellow former Soft Boy legend Kimberley Rew. For the 'Brenda's Iron Sledge' / 'Queen of Eyes' finale he fronted a unique three electric guitar/two basses line-up - and what a glorious racket they made! I drove the 70 miles home still buzzing and caught just four hours sleep before my alarm roused me for another early start, but I would've quite happily done it all over again the following day given the chance.

I'm still puzzled as to why the Glasgow show was postponed

Sound like just the reward you need for your long shifts - although I don't know how you managed it at all, I'm with you in the lightweight club - great to know Robyn is still on such good form.

CC. Modern Nature's tour was cut short a few days after the Ipswich show because Jack Cooper was diagnosed with a detached retina and had to undergo emergency surgery.

C. I've no idea how I ever managed several gigs in a week. Where did all that energy go?