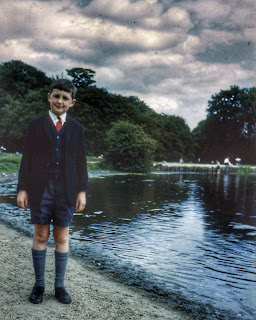 Wanstead Flats in North East London, is a detached slab of the ancient woodland Epping Forest - a 334 acre oasis of green in an otherwise heavily built up area. On Sundays, when we didn't go wandering the streets of Central London, Dad and I would often head over to the Flats. It was his old manor, an area he'd enjoyed walking around as a youngster himself. There we'd kick a ball about, play a few impromptu overs of cricket or just sit at the edge of  Dames Road Pond watching the older kids and their Fathers sailing their model yachts, a very popular weekend activity in that location in those days. After much pleading, Dad eventually brought me my own miniature yacht, made of wood and around 18 inches long, which we took over the Flats one Sunday. It was a thing of beauty, painted a glossy sky blue, with crisp white canvas sails. I was excited - over excited. As soon as Dad sat the yacht on the water and gave it the gentlest push I freaked out. We were at the mercy of the wind, which was the whole point of it for most people, but I was convinced that it was never coming back to shore. It did of course, eventually, but by then I'd made such a colossal fuss that I don't remember Dad ever taking it out with us again. Instead the yacht spent the remainder of my childhood on, and later in, a cupboard in my bedroom, before disappearing from my life completely, in that mysterious way that things do.

I can't lay my hands on a photo of the yacht in question right at the moment, but here I am, all dressed up in my Sunday best, over the Flats one Sunday morning in 1967.

What a fine looking young man. Is that the Heron Pond?

Lovely stuff Swede, both the photo and the yacht story.

I'll be devastated if you don't recreate the look in Edinburgh next month.

Ernie: I couldn't say for certain, it's been a while.

John: Prepare to be devastated.