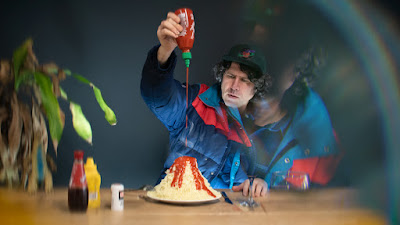 Back in the day, Mrs S and I were very partial to the second and third Gruff Rhys solo albums, 2007's 'Candylion' and 2011's 'Hotel Shampoo. Gruff stopped off in Norwich on his tours supporting each release, playing at the small Norwich Arts Centre on March 13th 2007 and February 20th 2011 - we were there for both shows and they were fun nights to be sure. For the latter, support came from the great Welsh instrumental surf band Y Niwl, while four years earlier a young Cate Le Bon opened proceedings with her own set before later joining Gruff to provide backing vocals on a couple of his songs, including this convoluted tale concerning dramatic events at altitude, here featuring Lisa Jên from Welsh folk band 9Bach on the original studio version.

This is a tremendous song. For some ridiculous reason it reminds me of early Caravan

Glad you enjoyed it George. I can't see the Caravan connection myself, but I've no doubt Gruff would be chuffed by your comment.

I really like the stuff Gruff released during the last years but this is new to me. A track you can lose yourself in it. Thank you for introducing me to this Swede

Gruff, Cate, Norwich Arts Centre... so much to love, Swede.

Thanks Walter & Brian. The two albums I mentioned are both well worth checking out if you get the chance.