A Bird You Must Not Miss 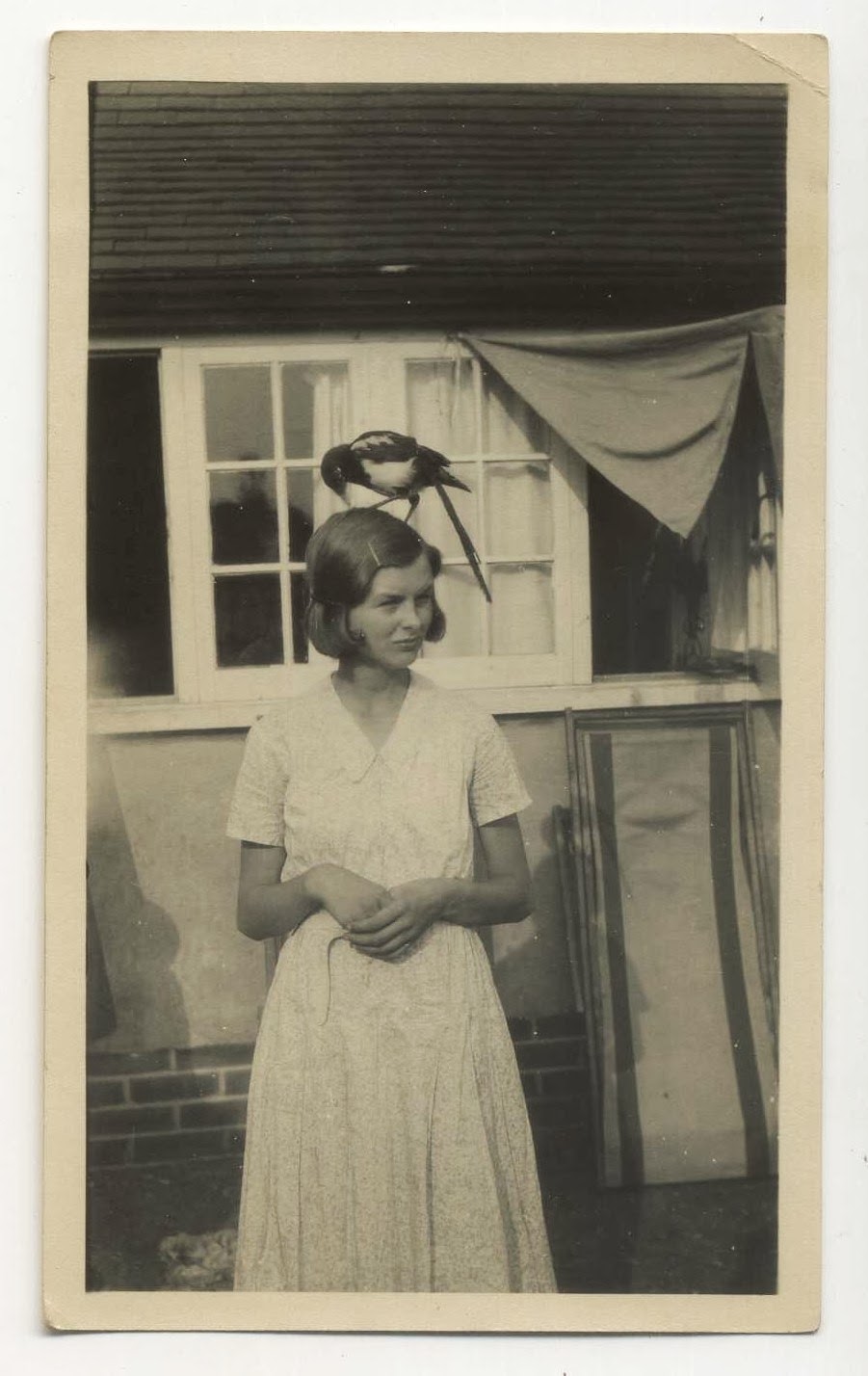 During my recent flying visit to London, I was struck by the selection of wildlife noises I heard in my Aunt's neighbourhood, quite a different range to those I'm used to around these parts. Take the skulk of urban foxes, screaming up and down her small back garden throughout the night and disturbing my slumber. In the two and a bit years we've lived out here in the sticks, we've seen precisely one fox - and that was being shot (possibly illegally) by a farmer at the time. Then there were fellow scavengers the magpies, by far most predominant birds I saw (and heard) during my stay and way more confident and cheeky than their country cousins who live in my neck of the woods. Not quite as confident as the creature perching on this young lady's head though! It's a c.1950 photo I picked up at a car-boot sale a few years ago in which the young lady in question appears amusingly oblivious to the sharp-beaked creature pecking away at the top of her head.

From this funny little snapshot it's just a short, extremely tenuous, leap to the 1970s kids TV show Magpie, ITV's cool answer to Blue Peter, which was co-hosted by corkscrew haired Mick Robertson. Already looking the part, Robertson tried his hand at the pop game in 1974 and 1975, releasing three singles and an album through CBS Records. The results weren't the run-off-the-mill, embarrassing drivel you might have expected to emerge from a TV presenter apparently cashing-in on his notoriety, far from it. Singles one and two,'The Tango's Over' and 'Then I Change Hands', are distinctly quirky, quietly ambitious songs, produced by future Rah Band overlord Richard Hewson. I loved these oddities then and I love them still, but for some reason never did get around to buying the LP....until now, 39 years later - thanks to eBay. Single number three? A Clifford T Ward produced, non-album one-off, released at the tail-end of 1975, after which Mick Robertson shelved his musical ambitions to concentrate on his day job.

I, too, remember these first time around. And he wore clogs. In fact, thinking about it, did you ever see him in the room as Brian May?

I don't see as many magpies here as I did when I lived in a town either - although I do hear them, especially in Spring, and one year we had a lone one visit every day who became quite tame. (Do you salute them? I was thinking about that the other day and been thinking of writing a post about it)
As for Mick, I just remember how much my sister fancied him! He was so much more rock'n'roll than John Noakes...

There's definitely a world of difference between your urban garden and your rural equivalent. Oddly, it being a bizarre mixture of both worlds down here in the valleys, we seem to get it all (apart from pigeons - not many of the feral kind). As for Mick, those are tasty slices of 70's pop. You bought the album? Well done! Magpie was so much cooler than BP and had the added bonus of Jenny Hanley (once Susan Stranks moved on). Great post.

John. I'd forgotten the clogs. He's just dropped a couple of notches on the coolometer.

C. I see a fair few magpies around here, usually if I take a walk of an evening, but not in the quantities I saw in East Ham! Are we meant to salute them? News to me - you'd better write that post!
I thought Mick was pretty rock'n'roll too...until John reminded me about the clogs.

SB. Pigeons are a little thin on the ground around these parts as well. Plenty of Collared Doves though. Ah yes, Jenny Hanley, we all loved Jenny.

You don't know about saluting magpies?! I'll get that post written soon as I get time, then!
(Just wondering, The Swede, if you wouldn't mind and if you have chance, perhaps you could drop me a quick email - address on SDS - as I'd like to pass something on to you, thank you!)

I was a bit old for maggpie but I remember the guy....what a surprise both these track are not that bad at all