I woke unusually early this morning and, as I lay in the dark listening to the pre-dawn chorus of cockerels crowing far and near, for some reason I counted up all of the places i've called home throughout my life - 14 so far. That's 13 moves in nearly 54 years, the first with my parents in 1975, the latest two with Mrs S and ten in-between solo, or with friends and other strangers. Is there an average number of moves one makes in a life? I find the whole business ridiculously stressful, so i'm in no hurry to to add another to the list. Fortunately for me, Mrs S took charge of the situation a couple of years ago, when we moved from our rented place in the city to a slightly more rural home of our own. There were a few moments back then where it was all proving too much, my chest became tight and I seriously felt as though I might have a heart attack - never again! 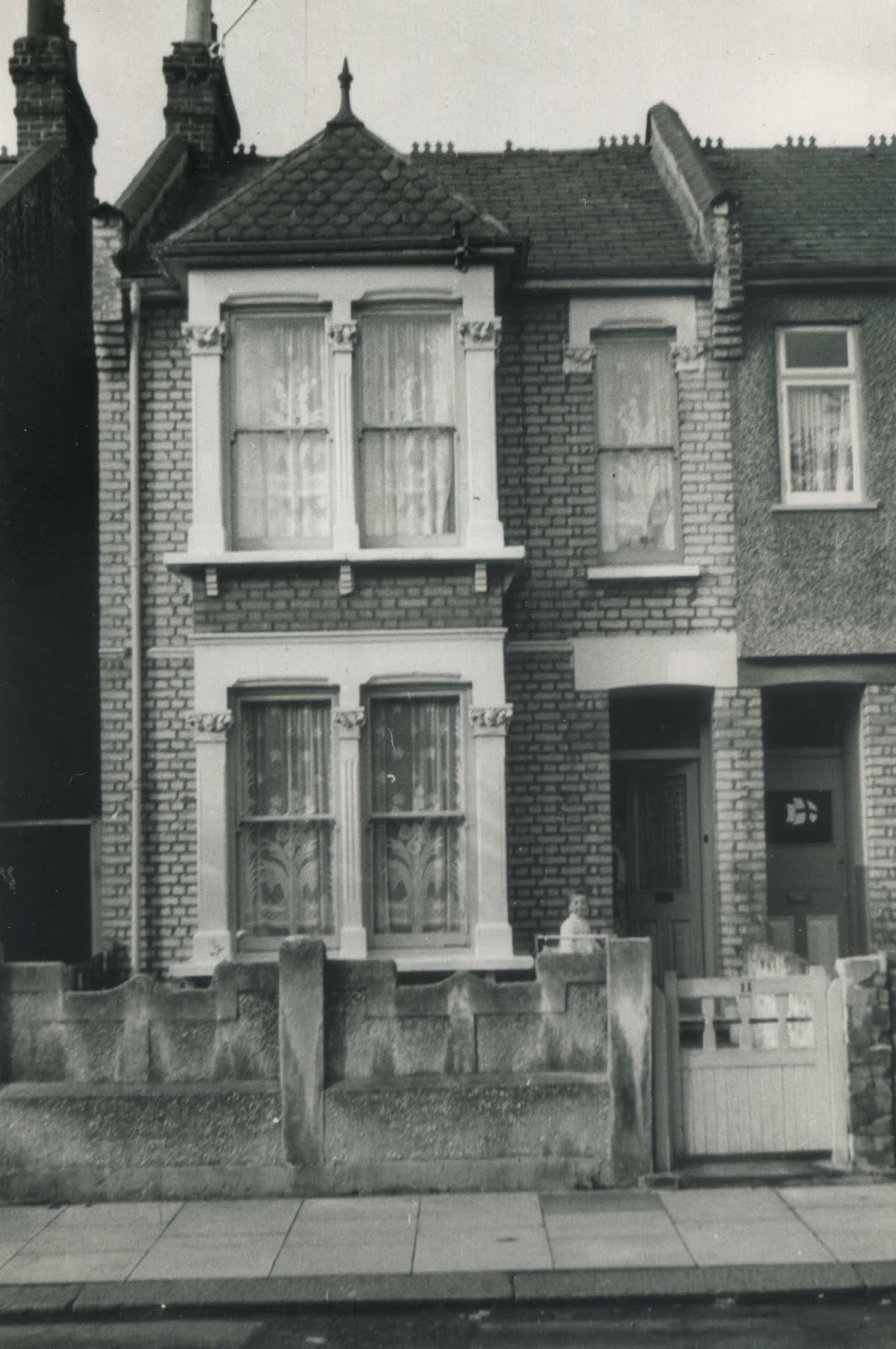 This is a 1961 photo of home number one, the house in Walthamstow where I lived from birth until the age of 15 - that's me sitting up in my pram in the front garden. While recently thinning out some old family paperwork, I discovered that Dad took a mortgage out on the place in 1958 for the mighty sum of £1100. When he sold up in 1975 it went for £11,000. I have no idea what property values in the area are now, but no doubt the figure would make my eyes water. I haven't ventured back into the old neighbourhood for over 20 years, but then, there is no real need to anymore, it's all up here (taps head). Besides, these days if I ever get the urge to actually revisit my old stomping grounds I can simply jump online to Google Street View, where i'll quickly discover that the old stomping grounds up here (taps head), are long gone.

Here's the great Alan Hawkshaw to add some groove to your next move.

Great post, great thoughts, great music. Think I've moved about a dozen times myself and find it to be extremely stressful, so I'm really hoping we don't have to do it again. Of course, if we win the lottery it may be a little easier! Fine groovy track on the old KPM label. On of my vinyl regrets is when I recall the large collection of KPM albums I once picked up in a charity shop in Bath for around 50p each to only get rid of them the same way when I was desperate to make some room. Why, oh why, oh why?

On a different note, whilst I am on blogging hiatus, I have sent C at Sun Dried Sparrows my e-mail address. She said she'd be happy to pass it on to you if you contact her. No worries if you don't but I'd like to be able to keep in touch, sir. Take care.

Ditto Singing Bear! And that photo is just brilliant too.
That's a lot of moves, I can understand how stressed you must have felt on the last one, but so glad you're happy where you are. I've only moved 6 times, that's felt like enough. I love where we are but it's so tiny, we're rapidly running out of room so I suspect another move is on the cards at some point, but I don't relish the thought at all!

SB. I can't believe you let those KPM records go. I've never actually owned a KPM LP, or even seen an original, but have downloaded quite a few here and there. I feel your pain - the things I've sold over the years when money was short.

C. To be fair, many of my moves were simply from one set of digs to the next. In those days I'd chuck a few bags of clothes and a handful of records into the back of the car and I was off! I've noticed my stress levels rising more with each move in recent years and I think it directly correlates to the amount of stuff I own and have to transport! De-cluttering might be the answer!

Interesting one.....when i first moved to london I had a spate of moves of 7 flats in the spqce of 2 years. Apart from that 9 othere moves. So that makes 16 in total.
The last move was bloody stressfull. So much stuff to get rid off...nice tune there too.

We've moved twice in the last two years (out of one into an apartment while we looked for another). The last was in August and I think my wife is just now getting over it.

Funny we know live just across the lake from where I last lived with my parents...me and the Mrs. were married in the back yard. Otherwise it's completely unremarkable.

The home where I spent most of my childhood really does only exist in my head. It has been torn down and reclaimed by the woods (an amazingly quick process in the sub-tropics).

I'm pretty sure my first home was an efficiency motel...hopefully its gone now too. Otherwise, I shiver to think what may be going on there now.

Old Pa. 16, you take the lead! I think you hit the nail on the head there, so much stuff to get rid of - so much stuff in general. You never realise how much stuff you've accumulated until you move.

Erik. From a quick glance at Street View, our house was still recognizable, but the neighbourhood where I used to hang out and play has changed almost beyond recognition.
Your comment has got me wondering if any of my other previous homes have been demolished - back to street view!
Thanks for dropping by.