Saturday Scratch #34 - The Upsetters...and a bit of Dillinger

Swans are a common sight on the marshes around these parts, alone, or more commonly in pairs. While out walking one day early last summer, I stood silently for a full quarter of an hour watching one such pair in the early stages of constructing a nest, a little inland, by a riverside path. They displayed such co-operation and attention to detail - it was quite something to behold. Here's the thing though. Every now and again, if I'm lucky, I'll see swans in flight and they are invariably in a group. Why not as a pair, or solo, the way they live on the ground? Is it a social thing? Communal exercise perhaps? Just the other afternoon, while chopping wood, (does that make me sound like a great outdoorsman?) I heard the familiar sound, which always reminds me of the slow motion helicopters in the opening scenes of 'Apocalypse Now'. That unique whooping thwack of wings keeping ungainly bodies aloft. Then I saw them, seven majestic swans flying in formation across the garden and down towards the river. Breathtaking. 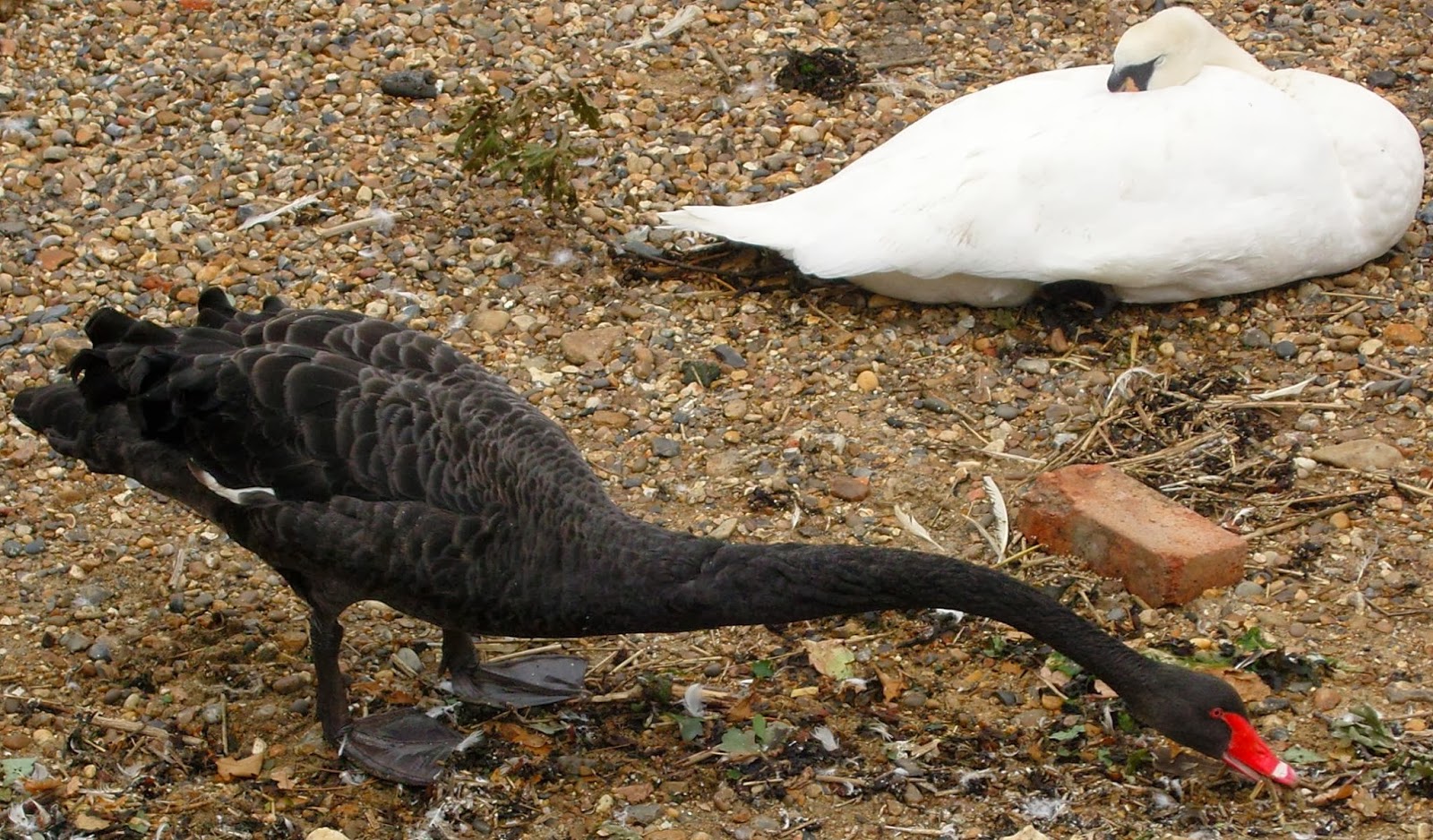 To my knowledge there are no black swans locally, I've certainly not seen any, but here's a shot of one I saw foraging around near Manningtree a few years ago. I wish I had photoshop on my laptop - I would've taken out the brick! The reason I mention black swans is that the record label Black Swan, popular for it's Ska output in the early 1960's, was briefly revived by parent company Island Records in 1976/77, and was an outlet for a small selection of Lee Perry productions. Around a dozen singles and a couple of LP's were issued before Black Swan shut up shop once again. The rekindled label's catalogue may have been slim, but the quality was high. Here, from the flip of George Faith's sublime cover of William Bell's 'To Be a Lover', are The Upsetters with 'Rastaman Shuffle'. Oh, and if you're wondering how exactly Dillinger's disembodied and out-of-sync toasting fits in with opening two minutes of the tune, well...it doesn't. Apparently Scratch would re-use blank tracks on previously recorded tape for financial reasons and in this case an unrelated section of 'Roots Train' somehow made it through to the final pressing.

How gorgeous to have swans flying directly over your garden - I don't know why they tend to fly in groups whilst not spending so much time on the ground in a flock, though. Perhaps it's a seasonal thing, and those are last year's youngsters flying to new breeding grounds to look for mates? (Must do some research now!)
Beautiful creatures - I seem to remember there are some black swans at Audley End House too should you ever go.

I love seeing herons in flight too, all those big birds seem to defy gravity.

Cool Upsetters track and Dillinger doesn't seem to get in the way; I like how Scratch didn't seem to care anyway.

Not sure why swans tend to fly in groups (safety in numbers?) but they are always a sight to behold. We don't see many (or any) around here but ducks and herons are plnetiful, along with a few moorhens. On Christmas Day, whilsy out a-walking with the hound, I saw a gorgeous kingfisher, who hung around us all the way along the local canal. It seemed apt and affirming.

C. I see the occasional heron in flight, but not very often. Swans, geese and owls pretty regularly though. I guess the marsh is a good location. Never been to Audley End - worth a visit?

SB. I'd love to see kingfishers. I've seen precisely one in the two & a bit years we've lived here, despite there being plenty around these parts.

A swan, me a swan, ah! go on!! Nice little post TS and great track too!