The Tracks of My Year #2 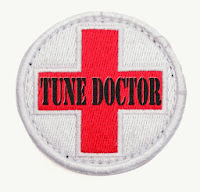 I'm honoured to, once again, be included among the contributors to Tune Doctor's year-end round-up, where I've selected 20 of my fave raves from the past 12 months (here). As usual most of my choices are in no particular order, but this year, for the first time in a long time, I've stuck my neck out and actually nominated my own personal toppermost of the poppermost.

A tune that doesn't feature in my 2013 selection is the fantastic 'Birth in Reverse' by St Vincent, which arrived slightly too late for consideration, but, as the album isn't due until the end of February, you can expect to see it vying for position in my 2014 picks, come the end of this year.


(While you're in the neighbourhood, be sure to sample Tune Doctor's entire 'Best of 2013' range!)

I like it....
Looking forward to hearing more previously undiscovered sounds on here this year - UOTS is one of my favourite blogs which I rely on for my continued musical education. Thank you!

I will look forward to this as guaranteed a great listen....I am still trying to catch up from before Xmas....but will get there.Will report back!

Thank you C. Right back atcha!

Old Pa. I heard another tune from the album on 6music last night - well up to standard.