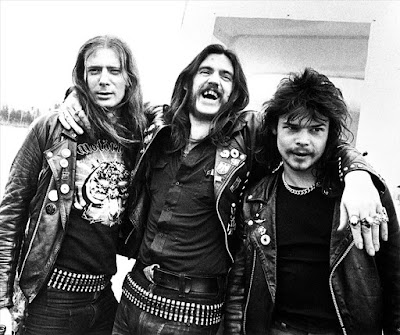 He'd already left Hawkwind by the time I first saw them and I never experienced Motörhead in concert, but on my gig going trips to London in the late 70's and early to mid 80's, Lemmy was often on hand, lurking around the scene. I particularly remember one evening seeing him, dressed uncharacteristically in white, a lady on each arm, propping up the bar at Dingwalls. Usually though, he'd be lost, chain smoking, absorbed in playing a slot machine, by all accounts a habit that stuck with him until the end.

Many tributes have been paid to the man over the past few days and many of his records have been played, none more so, I suspect, than the immortal 'Ace of Spades'. Here, to prove that a truly great song should be a great song in whatever style it's delivered, is Robin Williamson from the Incredible String Band, performing Lemmy's most enduring composition.

That's a great memory and creates a lovely picture of Lemmy: dressed in white with a woman on each arm... I'm sure it's how he'd like to be remembered, like some kind of rogue angel.
I also thought for a moment here that I had stumbled on an outtake from Vic Reeves' Big Night Out. I mean, I can just imagine Vic or Bob announcing, perhaps for an act on Novelty Island, "And now we have Robin Williamson from the Incredible String Band - playing The Ace Of Spades - on a harp"... Not sure what I make of it but certainly took me by surprise!

I love Robin Williamson, although it striking to see him looking so old!

Losing Lemmy is a shocker.
This rather surprising take works as a very touching tribute.
RIP, Lemmy.