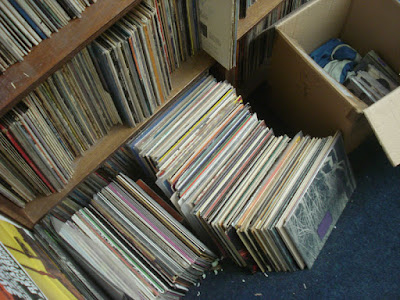 And so to my favourite five albums of 2015. There'll be no tremendous surprises here for anyone who has cast a beady eye over this blog in the past 12 months. Here we go (in reverse order, natch....).

Daniel's songs can bring a smile to your lips one minute and cause a shiver to run down your spine the next. The power of his voice will rock you back on your heels before melting your heart. It's extraordinary stuff.

4) Trembling Bells - The Sovereign Self

When I listen to Trembling Bells, I find myself concocting make-believe musical genres in an attempt to pin down their general wonderfulness. Last time I posted about them (here) I hit on 'Psych-Folk-Kraut-Rock', though I'm currently favouring 'Medieval-Wyrd-Noir'. Feel free to disregard my waffle, except this next bit...'The Sovereign Self' is an astounding LP.

I'm sure that everyone has a select clutch of artists about whom they find it incredibly difficult to remain objective. Alasdair Roberts is one such artist for me. This fantastic LP was released on Drag City in January and was followed later in the year by an EP as a member of The Furrow Collective, then in the Autumn with another, self-distributed, solo LP, 'Missed Flights and Fist Fights'. There may very well be more 2015 recordings out there that I still need to track down, such is Alasdair's restlessly creative nature. I have a ticket to see him in concert again in March, expect further gushing superlatives to come your way shortly thereafter.

'Hinterland' has been so deeply embedded in my noggin this year, that for a while I completely disregarded it from my 2015 review, being convinced that it must have actually been issued in 2014. It's a terrific album, released a full five years after its predecessor 'Nerve Up'. Let's hope we don't have to wait quite so long for the next one.

Rozi Plain contributed substantially to This is the Kit's excellent 'Bashed Out' and also to 'We Resonate' by Rachael Dadd, a fine LP that reached my 2014 long-list. In spite of this, 'Friend', the third album Rozi has released under her own name, inhabits a unique sonic world, sounding quite unlike anything else I've heard, while simultaneously remaining resolutely warm and accessible. An absolute delight and highly recommended.

Happy New Year to you and Mrs S from me and the Mr.
Are those your records in the top pic? It looks like a record shop... :-)

Thanks C - and the same to you and Mr SDS.
Those aren't my records I'm afraid. Sadly mine are still boxed away - so are the CD's come to that. We still can't find a good home for them in the house. Expect more grumbling on the subject as the year progresses!

Love that Daniel Knox tune. I recall liking the other song you featured not so long ago. Thanks, as ever, for the intro.
Trembling Bells are certainly taking us back in time in a good way! Would definitely like to own this one some time.
Alasdair Roberts is too bloody talented! BTW, thanks for leading me to the Furrow Collective album, which is a highlight for me.
I note that Rozi Plain is a friend of Bristol Bike Project. Nice music.

You have given us tons of great stuff to chase up over the past year. Thanks for everything and for keeping me so busy!

In a year where every other top ten list on the internet has Kendruck lamar sitting at #1, here, at last, is a ldt with some variety that's going to allow me to0 jump in and do some research.

Thank you! I am glad I found this page and look forward to reading a lot more of it in 2016.

happy new year Swede, some stuff in your top 20 I need to check out. Which is surely the point, innit? Time to get your records housed properly I think...

Thanks for the kind comments folks and a particular welcome to Nasreen. I hope you all had a fab 'n' groovy festive period.

Immediately impressed by Daniel Knox. Will have to work harder with the others.