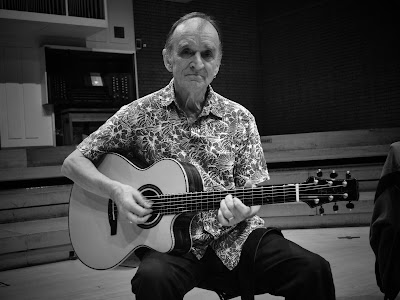 On Sunday evening, in a basement space little bigger than my living room, Martin Carthy gave a two hour folk tradition masterclass to a riveted 50-strong audience. From 'High Germany', the very first track on his very first album in 1965, to 'Her Servant Man' from 2014's 'The Moral Of The Elephant' (his most recent LP, recorded with daughter Eliza), Carthy cherry-picked tunes from a vast repertoire, offering extensive background information to every song as well as crediting all the relevant sources in each case. 'The Bedmaking' from 1976's 'Crown of Horn', an epic 'Famous Flower Of Serving Men' from 2006's 'Waiting for Angels' and 'Georgie' from 1998's 'Signs of Life' were a few of the many high-points, as was an acapella romp through 'Oor Hamlet', which was a complete hoot that had us all in stitches. Best of the lot though was 'Bill Norrie', a tragic ballad originally recorded for 'Right of Passage' in 1988, but these days delivered at a considerably slower pace, an arrangement that only adds further gravitas to the sombre subject matter. This poor quality audience recording of 'Bill Norrie' from last year merely hints at how jaw-dropping Martin's performance of the song was on Sunday.

I'm due to see him later in the year with jazz guitarist Martin Taylor. In a room not much bigger.

A legend in a living room. Live music at its best, surely? It truly sounds like a wonderful evening.

T'was a special evening to be sure. Almost a week later, 'Bill Norrie' is still my earworm!